The Japanese Yen has been doing, well, not much, against the US Dollar so far this year beyond perhaps proving the value of Fibonacci retracement levels as trading points to conjure with.

USD/JPY has been effectively stuck in a broad trading band between 109.64 and 108.50 since January 6. It has broken both above and below it on occasion but the importance of those two levels to trade is obvious from the chart. 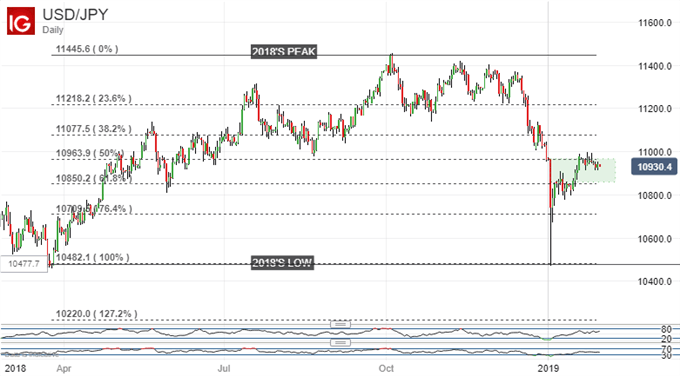 Moreover, they represent, respectively, the 50% and 61.8% Fibonacci retracement levels of the rise up from 2018’s March lows to the peaks seen in October.

Now we come to a period in the monthly data cycle when fundamental factors are likely to make their presence especially clear on the charts. The US Federal Reserve will set monetary policy later on Wednesday with the markets expecting a more cautious stance on interest rate rises and, perhaps, some emphasis on the absolute data dependency of any more this year.

Much of this prognosis seems to be in the price, but there could yet be at least a knee-jerk move lower in the US Dollar broadly on any confirmation. The Yen seems unlikely to escape this, and it could mean the USD/JPY range breaks to the downside at least temporarily.

However, it should be noted that Dollar bulls have defended current levels quite doggedly and an enduring move lower may be unlikely in the short term. In other words, falls could offer quite good buying opportunities for those with narrow time horizons.

Signs of more enduring weakness may bring the next-lower retracement level into play, however. That comes in at 107.09, but looks too far below the market for an early visit.

Meanwhile the upside looks barred by the sharp series of daily-chart falls seen between December 27 and January 2. Dollar bulls will have to work hard to make those back for anything like keeps and a close above December 26’s peak of 111.33 would be a first sign that they are up to the task.

With Brexit so much on market minds it probably makes sense to look at GBP/JPY this week.

Despite falling against the Japanese Yen in the past three sessions, the Pound remains perhaps surprisingly within the daily-chart uptrend channel which has bounded trade since the cross bounced on January 4. 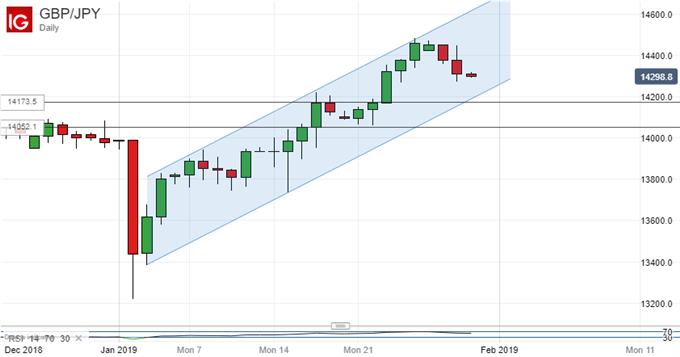 Much of its fightback has been founded on the idea that the UK will not leave the European Union without some sort of deal. While that probably remains the markets’ base case, just about, uncertainty could see the Pound break below that channel this week.

If it does, near term focus would probably then be on a band of support from mid-January. However, should that give way too, and it easily might, then the entire recent rise could be put into doubt.