The Japanese Yen remains on the back foot against a US Dollar well supported on a fundamental level by a yawning interest rate gap in its favor.

Admittedly USD/JPY has slipped back a litle both last week and this, but that move looks as though it is corrective in nature. However the Dollar has slipped below the uptrend channel which had previously contained trade since October 26/ 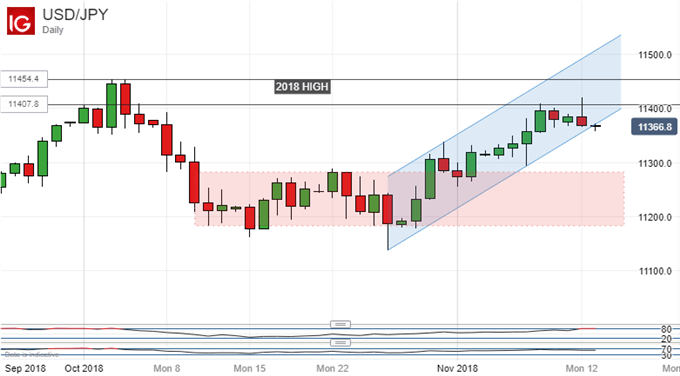 That slip has not been confirmed by a daily close and, even if it is this week, it will probably take a fall below support in the red area of the chart above to raise the specter of more serious short-term problems for the US Dollar, and I don’t expect that.

To the upside resistance looks reasonably stiff at 114.08. That was the intraday top of October 5 and November 8 an the bulls are going to have to consolidate around or, preferably above it, if they are to have another crack at 2018’s high of 111.55. Assuming no collapse in global risk appetite as they year bows out, the Dollar should probably be capable of reaching and topping that high, which means that dips be thought of as likely buying opportunities for as long as that support zone holds on a daily close basis.

The Euro seems to be in more trouble against the Japanese unit, with EUR/JPY’s slide accelerating notably this week.

EUR/JPY is now hovering just above trend-line support from 2019’s low, made in mid August. Key support is uncomfortably close at 126.80, October 26’s intraday low. If that breaks then the year’s low will be in the bear’s sights yet again.

Above that, trend-line support lies around 126.92. If that holds on a daily-close basis then bulls can hope for consolidation and, maybe, a bounce. A test lower looks more likely at this point, however, with the downtrend from this year’s late-September peaks still quite entrenched.