Find out what foreign exchange traders make of the Japanese Yen’s chances right now at the DailyFX Sentiment Page.

The Japanese Yen is tracking a little higher against the US Dollar, but in reality USD/JPY remains stuck in the broad trading range which has just about contained all the action since April 23.

I say just about because the pair did manage to poke above the range top of 110.23 in mid-May. Indeed it managed to stay there for a week or so. However as that period gets ever more distant, the more spurious that rise looks. 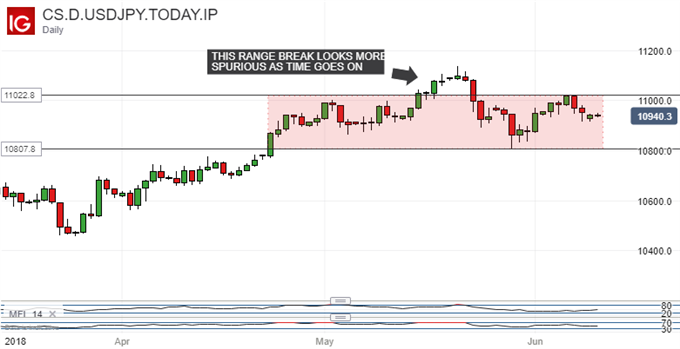 For the moment at least it might be wise to trade as though this range were really all you have to play with. The downside is formed by 108.09, which was May 29’s intraday low. Interestingly it is also almost exactly where we can find the important 50% Fibonacci retracement of the rise from the lows of late March to the May’s highs. 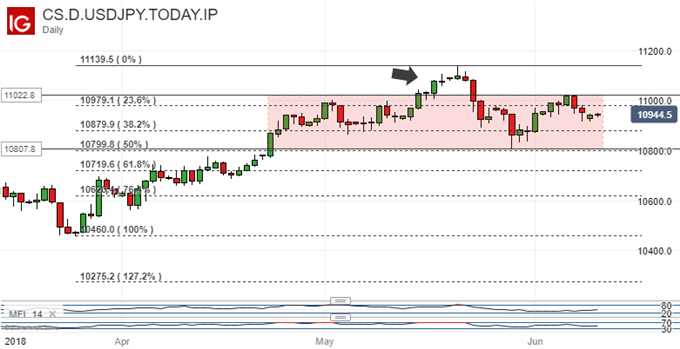 That point seems to be quite formidable support, and should hold if tested. One problem for US Dollar bulls might be that the daily chart could be forming rather a classic ‘head and shoulders’ formation. If so this would be bad news because it might suggest reversal of that climb, at least, is in the offing.

However, while that key support level holds it is possible that those bulls may yet be able to use it as a platform for some sort of comeback.

Meanwhile the UK Pound’s uptrend against the Japanese currency endures, but only just. That channel has been in place since late May and looks to be enduring a downside test around current levels, so watch the next couple of days’ closes with interest.

Channel failure will put the recent lows back in uncomfortable focus for Sterling bulls. Moreover, even if the channel holds, those many consecutive red candles between May 18 and May 29 still look like a pretty fearsome obstacle.