The Japanese Yen is staging a very modest fightback against the US Dollar after weeks of unrelenting bullishness towards the greenback.

USD/JPY seems tentatively to have made some kind of top at last Monday’s intraday high. That came in at 111.39. The US Dollar has been declining since, part of a broad based retracement which has seen it lower against the New Zealand and Australian Dollars too, even if the Euro remains under a bit of pressure thanks to political worries in Italy.

Still, it may not make sense to bet on a comprehensive turnaround in US Dollar sentiment just yet. USD/JPY’s retracement has been quite modest and for the moment at least seems limited to a support zone derived from the previous significant peaks, which were made in early February. 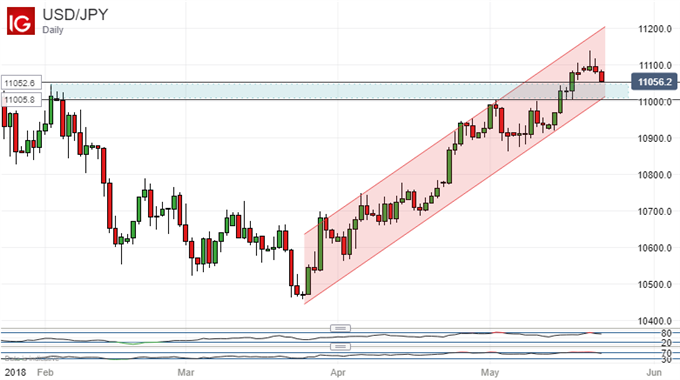 Even if these give way on a daily basis, support between 109.00 and 110.00 looks fairly solid. It seems likely that what we are seeing here is a bit of consolidation that Dollar bulls could frankly do with, having pushed the pair’s momentum up to levels at which it was starting to look a little overbought.

The uncommitted might now do well to wait until markets have seen the minutes of the Federal Reserve’s last monetary policy meeting. These are due for release on Wednesday, or early Thursday morning for Asia Pacific investors. If they reinforce the idea that the Fed remains by some distance the most aggressive policy tightener in the developed world, it’s hard to see the US Dollar falling very far. Indeed such a message may embolden Dollar bulls to have another tilt at those Monday highs.

A more lukewarm interpretation of the Fed could see a broader slide USD/JPY. However even the first, 23.6% Fibonacci retracement of the rise since early April comes in some way below the market at 109.79. 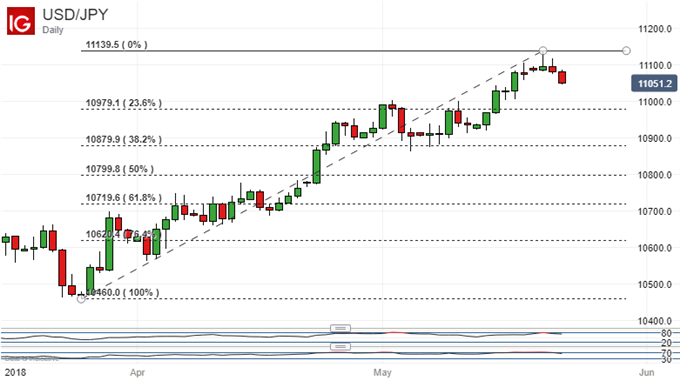 While that is unthreatened the prospect of a more serious Dollar reversal seems scant.

Meanwhile the UK Pound also seems to have topped out against the Japanese currency this week, and its prognosis looks a little gloomier. Immediate GBP/JPY focus is on a cluster of probably modest support at this month’s lows. 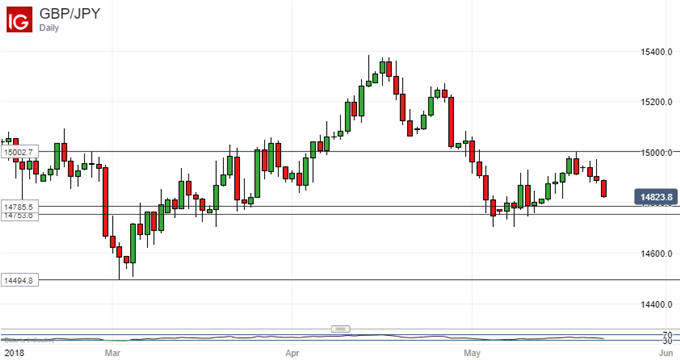 Should that give way then there’s not much between the Pound and complete reversal of the climb up from March.