The Japanese Yen remains under grave pressure against the US Dollar from a fundamental standpoint.

The latest very weak growth data from Japan brought the curtain down on a nine-quarter run of economic growth. It has also cast clouds over the country’s ‘Abenomics’ reform plan and, surely, kicked any prospect of tighter monetary policy from the Bank of Japan a very long way into the long grass.

Technically this growth weakness has only boosted an already strengthening US Dollar. USD/JPY now flirts once again with the highs of early February which are around current levels.

If Dollar bulls can hold their nerve up here, then their next target will be late January’s highs in the 111.50 region which in turn guard the path back up the year’s peaks. These would seem eminently reachable at the moment given the yawning and, presumably widening gap in monetary policy between Tokyo and Beijng. However progress toward them will probably be measured and marked by periods of consolidation. 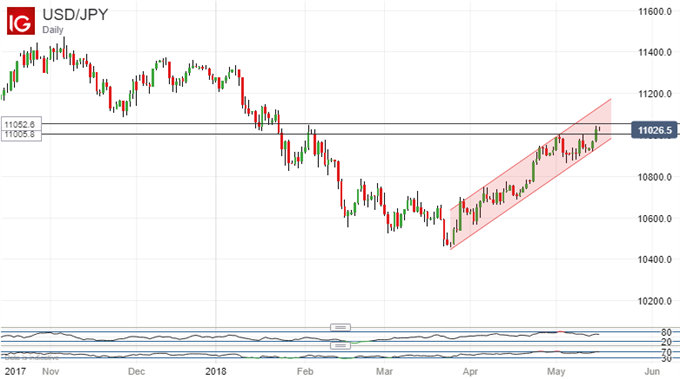 Reversals will probably find support at the current up-channel base, which presently comes in at 109.42 or so. This channel has been fairly well respected both to the upside and the down, but more overt Dollar bulls might well want to see another upside test soon. Aftger all that upper bound remains quite some way above the market, for all the greenback’s current vigor, at 111.43.

The Australian Dollar has been another notable victim of US Dollar strength but it is also wilting against the Yen. AUD/JPY seems to have made yet another lowe high on its daily chart in the past few days, with the focus once again on the downside.

Bulls will need to defend the previous significant low at JPY81.20 if they’re not to have to deal with a probable broader slide all the way back down to April’s lows of JPY80.55.

A fall this far would put serious question marks over the entire rise up from late 2016’s lows, which came in at JPY75.10.