Remember the “Tipping Point” in JPY

The concern at present is that the tipping point of this move toward a stronger JPY aligned with the Bank of Japan announcement of negative interest rates. That was seen, as a “Hail-Mary” of sorts to weaken the JPY be engaging in such a dramatic policy shift that would have large and uncertain implications.

Looking above, you can see what appears to be a very clear downtrend alongside a 200-WMA (currently at 106.42). The chart above does not show the long-term significance of the 200-WMA, but the break below favors further downside.

Now, the larger fear is that we are entering not only a more volatile currency cycle but also a time of renewed JPY strength that central banks will have a hard time controlling given they’ve provided most of the stimulus they can and are now searching for less tested/ trusted means of “price stability.”

The Bearish Price Channel (Red) is drawn from the June 2015 High, the August 24 low and the November high. This channel has contained the price rather well, and until there is a break above that channel median-line (106.42), it is difficult to say with a straight face that the Bull market may soon resume.

Shorter-term resistance will be at the Friday’s high of 103.385. This level is significant resistance as well because it aligns with the July opening range high as well as the late May low.

Lastly, support is less necessary to define due to the strong downtrend. Naturally, the Friday, June 24 low of 98.77. Below there, you can look to the 61.8% Fibonacci Retracement of the 2011-2015 range at 94.83. Given the recent volatility, a new breakdown could easily bring us to these levels. Should we break below these levels, expect to hear from the Bank of Japan.

However, USD/JPY SentimentShows Bulls Are Getting Confident. But, Why? 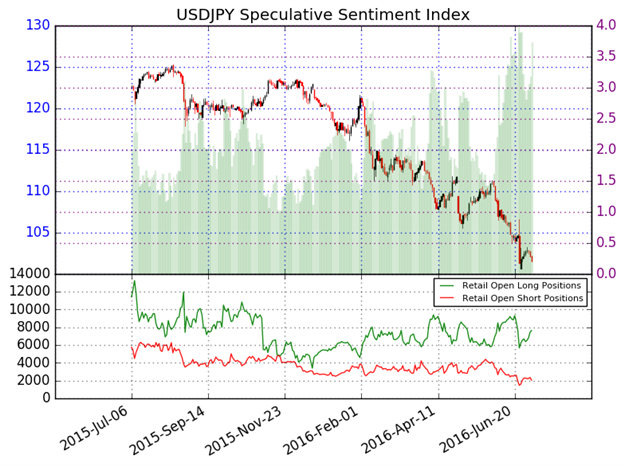 As of mid-day Tuesday, The ratio of long to short positions in the USDJPY stands at 3.67, as 79% of traders are long. Yesterday the ratio was 3.28; 77% of open positions were long. Long positions are 6.9% higher than yesterday and 16.5% above levels seen last week.

Short positions are 4.4% lower than yesterday and 9.6% below levels seen last week. Open interest is 4.2% higher than yesterday and 6.5% below its monthly average. We use our SSI as a contrarian indicator to price action, and the fact that the majority of traders are long gives a signal that the USDJPY may continue lower. The trading crowd has grown further net-long from yesterday and last week. The combination of current sentiment and recent changes gives a further bearish trading bias.