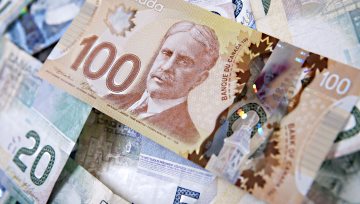 To paraphrase the proverb, the fear of momentum is often the beginning of wisdom for trend followers. Thanks to trend following indicators like Ichimoku (chart below), it is easy to see the strength of the downtrend that began to gain steam in June though turned in May. USD/CAD has fallen by over 12% from the year to date high in early May, and some may have seen today’s move is an acclamation point, but there is little evidence that the trend is turning.

What will happen to the USD as other central banks begin normalization? Click here to see our latest forecasts and find out what trades are developing in this new environment!

While it was not fully priced then, the Bank of Canada decided to hike the reference rate by 25 basis points to 1%, which caused USD/CAD to fall like a giant rock in water. The Bank of Canada noted recent economic data has been stronger than expected, which supported their view that growth in Canada is becoming broad-based and self-sustaining and not in need of an accommodative monetary policy.

The Bank of Canada did note that inflation currently remains below 2% and that they would keep an eye on historical extremes and housing appreciation leading to increased indebtedness, which securely sensitive to higher interest rates.

As many know, the world of foreign-exchange is relative in nature. No developed market is writing comfortably above the central banks inflation target. The hawkish tightening, a phrase nearly absent from central bankers dictionaries since the Great Financial Crisis, from the Bank of Canada gives us a glimpse of how central banks may handle the new normal economy. In short, we seem heading for growth despite low inflation as technological increases are subduing many inflation pressures outside of the housing market.

In a change of events, the downside risks to Canada seem to stem from exposure to the United States, which does not necessarily favor buying USD/CAD.

Lastly, the Bank of Canada estimates their neutral nominal policy rate at 2.5 to 3.5% which would be another 6 to 10 hikes away from the current levels. Naturally, this is on the longer-term horizon as only two more hikes are priced in by the end of 2018 per the overnight index swap (OIS) market. However, CAD strength appears to be the clean play, especially against weaker currencies.

Wednesday’s USD/CAD range hit 280 pips as the markets digested the somewhat surprising hike thatwas not fully priced then. Either way, the move and likely close below 1.2329 helps to continue to frame this move as downward impulsive in nature and not worth fighting.

The current bearish move is an excellent example of the fallacy that fighting momentum in progress is a favorable strategy. Traders are often better served waiting for evidence that the trend is turning before trading a turn.

Former support at 1.2450/15 will act as new resistance. As real money sellers come into the fold of the USD/CAD picture, it is fair to argue that the trend could extend to and below 1.2000.

The long-term target is 100% extension from the May high of the initial 2016 drop that targets 1.1565. Lastly, while the move seems sharp, the initial 2016 move had already expired in terms of time compared to the current move. A 1.618 time extension would favor Canadian dollar strength lasting at least until late 2016, and specifically late-October.

Daily USD/CAD Chart: Momentum is cruel to the trader who fights it 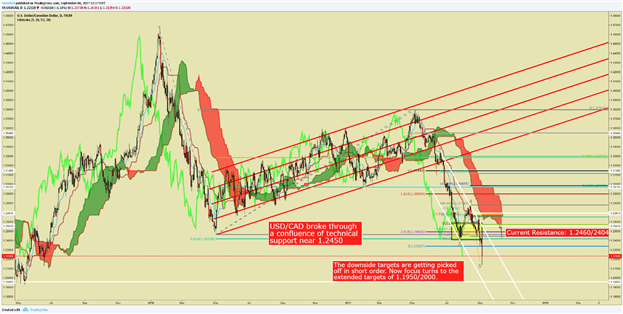 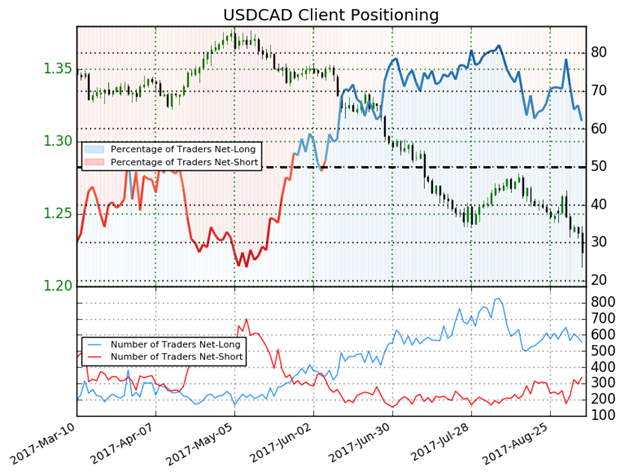 We typically take a contrarian view to crowd sentiment, and the fact traders are net-long suggests USDCAD prices may continue to fall. Positioning is more net-long than yesterday but less net-long from last week. The combination of current sentiment and recent changes gives us a further mixed USDCAD trading bias (emphasis added.)