USD/CAD Technical Analysis: Why CAD May Not Slow Down

A Behavioral Change on the Horizon?

The Canadian Dollar is having a banner run as price continues to push away from the Mid-January peak in USD/CAD. At the same time that CAD has gained nearly 5% on the Japanese Yen & 4.25% on the EUR in the last 5-trading days, the price of WTI Crude Oil continues to push against significant price resistance around 34.50/bbl. The historical correlation of Oil & USD/CAD has diverged somewhat recently from its prior lock-step relationship, but they could pick back up if Oil’s rise could be seen benefitting the Canadian Economy and altering the Bank of Canada’s Monetary Policy. For our long-term Oil Outlook, check it out here.

One development that continues to get little attention but appears to be very important to the direction of USD/CAD is the 2-yr yield spread between the United States & Canada. Today, the Canadian government printed a strong GDP YoY at 0.5% vs. exp of 0.0%, and the CAD strengthened further. At the same time, investors are wondering if the Federal Reserve will have to convince the markets that they do not intend to hike in 2016, which would further narrow the important 2-yr spread that has guided USD/CAD lower since mid-January. The 2-yr yield spread has narrowed from -60bp to -26.4 currently, which is a 3-month low in recent trading.

We have cleared the prior key level support of the 100-dma at 1.3618. Now, the focus has turned to the 50% retracement of the May-January range. A break below ~1.3303 would align with what we see on Ichimoku, which is price breaking below the cloud that could spell more downside ahead. Below 1.3305, traders will start focusing on 1.3000. Hard to imagine we were pressing ever closer to 1.5000 less than 2 months ago.

As mentioned above, the further narrowing of the 2-yr yield curve could be a catalyst for the test of the 50% retracement of the May-January range at 1.3303, and the 61.8% of 1.2977 that would likely need a strong drop in the US Dollar to accomplish.

When looking at sentiment, crowd sentiment has moved positive providing favor for more downside. We use our Speculative Sentiment Index as a contrarian indicator to price action, and the fact that the majority of traders are net-long at a bull: bear 1.339 means a bearish USD/CAD signal is currently at play. How price reacted around the 100-dma has communicated a behavior shift is at work. A break below this key support metric and a move into positive territory on the SSI would favor further downside towards downside targets mentioned above.

Combining the technical picture above, with the sentiment picture, and the break below support of the long-term channel/ 100-DMA alongside a move higher in retail sentiment to net long against a potential new trend would further warn of more CAD gains ahead.

USD/CAD Speculative Sentiment Index as of 3/1/2016 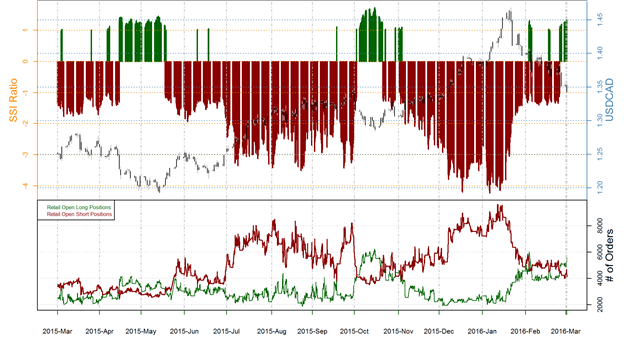