The reasons behind the US Dollar’s gains throughout April have remained rock solid: the Federal Reserve is on the cusp of a series of aggressive rates hikes while other major central banks are not; and accordingly, US Treasury yields have outpaced their counterparts in developed economies, pushing out interest rate differentials in favor of the US Dollar.

These reasons are very much the primary reasons for EUR/USD and GBP/USD declines, but for USD/JPY, there is an additional rationale: higher energy prices. Japan is a major energy importer, and the sustained elevation by gas and oil prices erodes Japan’s terms of trade have taken a significant beating.

While market participants await the Fed’s meeting next week, the Bank of Japan will release its latest rate decision in less than 24-hours. The BOJ will not be changing interest rates this week, nor will it be abandoning its QQE policy. But with respect to the latter of these points, with JGB yields running higher, another strong commitment to keeping bond yields capped will almost certainly emerge. In doing so, this could help spark the next leg of Japanese Yen weakness, with USD/JPY rates poised to test 130.00 for the first time in more than 20 years. 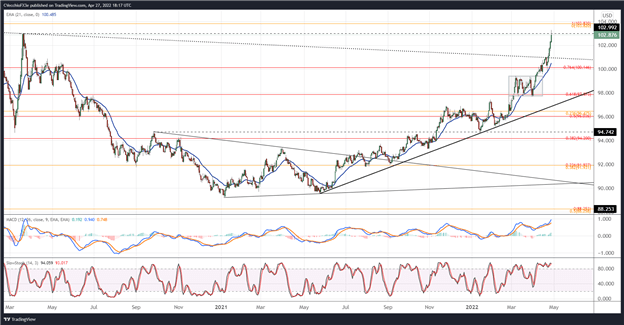 The DXY Index retains strong bullish momentum as it has breached its early-pandemic high set in March 2020 at 102.99, trading to its highest level since January 2017. The index is above its daily 5-, 8-, 13-, and 21-EMA envelope, which is in full bullish sequential order. Daily MACD is rising while above its signal line, and daily Slow Stochastics are holding in overbought territory. The DXY Index retains a ‘buy the dip’ mindset until the DXY Index drops below its daily 21-EMA, which has proved itself as support throughout April. 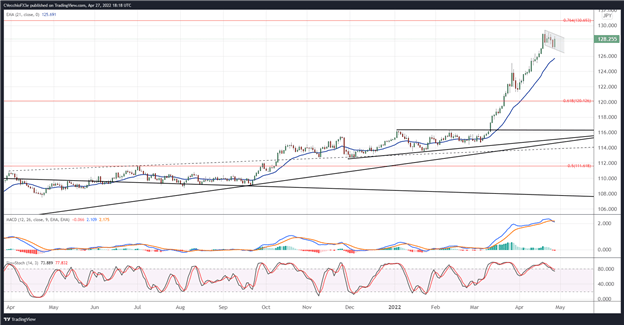 USD/JPY rates have had an incredible run higher over the past two months, not having tested their daily 21-EMA since the first week of March. Although the setback in recent days has eroded momentum indicators – daily MACD is trending lower (albeit well-above its signal line) and daily Slow Stochastics have dropped from overbought territory – it appears that a bull flag is being carved out. As such, traders may look to the BOJ rate decision as a catalyst to spur a bullish breakout of the flag; a move above 128.90 may signal the resumption of the uptrend, ultimately eying a test of 130.00 for the first time since March 2002. 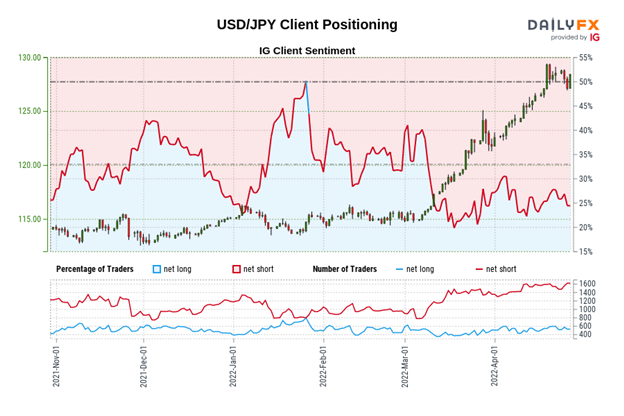