Weekly US Dollar Technical Forecast: All Hands on Deck 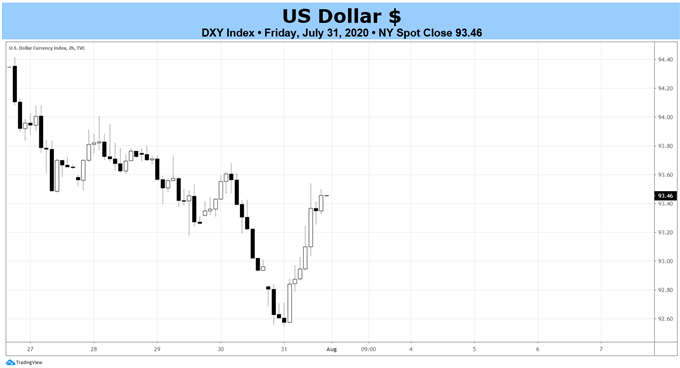 Technical Forecast for the US Dollar: Neutral

US Dollar Endures a Terrible July

The US Dollar (via the DXY Index) gained ground to close out the week and the month, marking only the sixth daily occurrence in which the greenback posted gains in July. Sustained low interest rates among US Treasuries and signs that the US economy was backsliding (relative to other developed economies) undercut the fundamental foundation of the US Dollar, giving plenty of opportunity for the bearish technical perspective to drive price action. July 2020 (-4.06%) was the first time that the DXY Index lost more than -3% in one month since January 2018, and it was the first time that the DXY Index fell by more than -4% since April 2011.

Several sustained technical breakdowns are in focus on longer-term time horizons as the calendar turns into August. The second half of July saw the rising channel from the February 2018 low and the March 2020 low lose ground as support. The last week of the month saw a more concerning development transpire, asthe rising trendline from the April 2011 and February 2018 lows gave way. Technical momentum remains bearish on the weekly timeframe, with the DXY Index trading below the weekly 4-, 13-, and 26-EMA envelope, which is in bearish sequential order. Weekly MACD is trending lower in bearish territory, while Slow Stochastics are in oversold territory.

Bearish momentum accelerated in late-July, with the DXY Index closing below its daily 5-EMA every single session throughout the month. While the DXY Index remains below the daily 5-, 8-, 13-, and 21-EMA envelope, the Friday reversal (perhaps due to portfolio rebalancing at the end of the month) speaks to potential for more gains in the very short-term. Daily MACD is starting to in bearish territory, while Slow Stochastics is edging higher in oversold territory. A close above the daily 5-EMA would give credence to near-term reversal efforts.

Invalidation of the longer-term breakdown would occur should the DXY Index retake the rising trendline from the April 2011 and February 2018 lows. In context of the 2017 high/2018 low range, the 38.2% Fibonacci retracement would need to be cleared as well: gains through 94.00/20 would signify a potential bullish reversal. Otherwise, the US Dollar will remain on exceptionally weak footing. 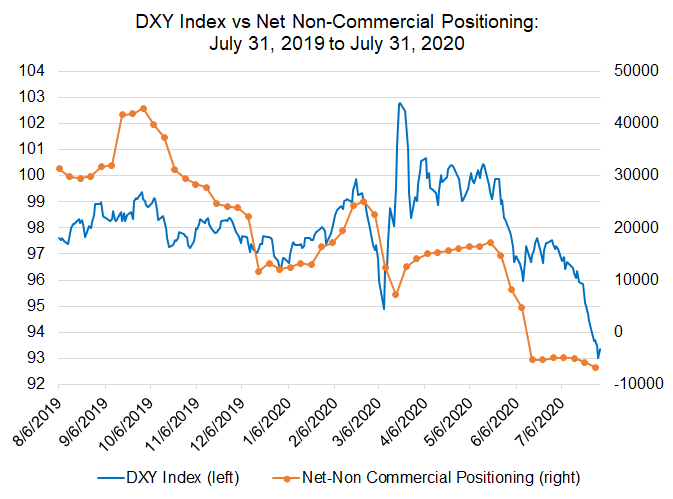