All signs clear! That is the message that USD bears took away from Janet Yellen’s speech at Jackson Hole on Friday. The USD traded lower and is approaching the lowest levels since May 2016 after Yellen took her opportunity to speak by dodging future monetary policy and focusing on encouraging thoughtfulness in pulling back regulations.

The risk she is running (known full well by her to be sure) is that as she comes up for re-appointment in February, is that she may not be seen as a team player. This approach has not bode well for government employees since November. It is worth noting she could be replaced by a possible more dovish Gary Cohn, former President of Goldman Sacks, Director of National Economic Councilto President Trump. It’s hard to tie the narrative that far in advanced, but, it could be that she is making her stand at the risk of her position, which could give USD Bears further room to run.

Want to learn how to trade from our experts? We recently updated and added new trading guides here.

Another place we have seen Dollar weakness presents itself is through the collapsing spread of 1- and 3-month T-Bills, which are a proxy for concern of Debt Ceiling negotiations. This week, President Trump threatened to back the Government Shutdown if there were resistance on funding his fiscal policy and political agenda of helping build a wall along the US-Mexico Border, a mainstay of his campaign. Regardless, it is worth noting that few Bullish Dollar points showed up this week. Adding to the previously mentioned points, Dallas Federal Reserve Bank President and CEO, Richard Kaplan said that the Terminal Rate is likely closer to 2.5% than 3%. While not ground shaking, it does bring another voice to the table of voters in the Federal Reserve who believes the current path painted by the DOT plot is too optimistic. The bond market agrees and has agreed as I have argued in Closing Bell webinars, but as the USD drops further toward 2015 opening range, it is fair to say the FX traders are readjusting their future expectations, and in so doing, taking the USD lower.

If you would be interested in seeing how retail traders’ are bettingin key markets, see IG Client Sentiment here !

Given the strength of the downtrend, it is fair to give a wider leash to the bearish view and only flip a bias from bearish to neutral if the price closes for the day above the August high of 94.15. Until then, I will expect the Bears to carry the flag and the bodies of DXY Bulls.

Join Tyler in his Daily Closing Bell webinars at 3 pm ET to discuss this market. 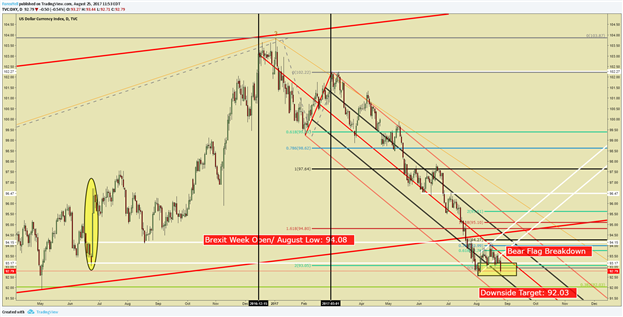 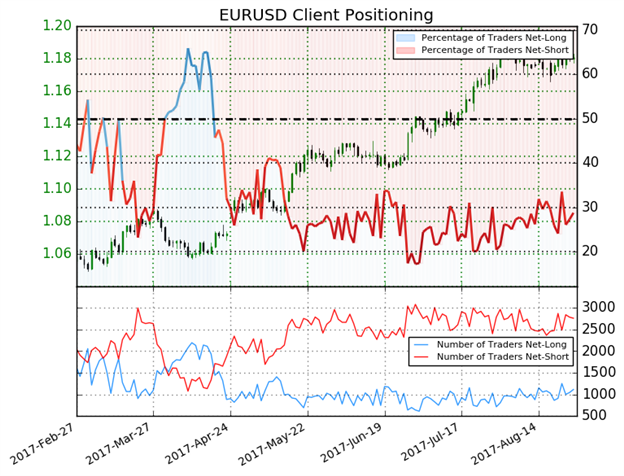 We typically take a contrarian view to crowd sentiment, and the fact traders are net-short suggests EURUSD prices may continue to rise. Positioning is less net-short than yesterday but more net-short from last week. The combination of current sentiment and recent changes gives us a further mixed EURUSD trading bias. (Emphasis mine)