-Pullback on yield volatility may be short-lived

- US Dollar Index Old Highs Should be Marked for Possible Support

The Dollar Index has spent the last two trading sessions reeling back from new 13-year highs at 102.05. However, the pull-back may be short-lived as it's fair to anticipate a further resumption of the trade above key levels of support on the chart.

The key support levels to watch were the prior resistance levels. When old resistance begins to react as new support, a polarity level is said to have developed in the markets. Polarity levels are said to be signs of new trend strength.

One component that has been exalted as a key determinant of USD strength is the aggressive move higher in yields. An RSI(14) reading on US Generic 10-year yields has broken above 70, which is considered a potential reversal point in range bound markets. However, in breakout markets, the move of RSI(14) above 70 can be an indication of further gains to be had as a new trend is being confirmed.

Naturally, such a strong move would favor waiting for ample proof before fading. For now, key support looks to found at prior trend highs from March and December 2015 at 100.39/51 respectively. 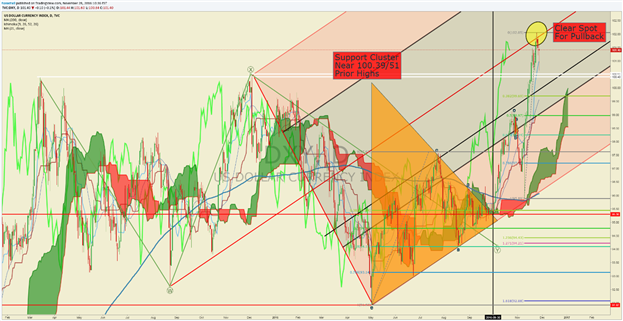 Another indicator worth keeping an eye on for ST directional bias is the 9-period midpoint (9-day low + 9-day high / 2) provided by Ichimoku as the Tenkan-Sen on the daily chart. Should current price remain above the 9-day mid-point, it is likely too early to call an “overcooked” market worth shorting.

Naturally, the term pull-back is subjective along with much of Technical Analysis. One trader's overbought signal is another traders trend breakout confirmation. However, you can see the Andrew’s Pitchfork median line on the chart above has been tagged by the recent price breakout.

This resistance touch does not mean that the trend is over. Again, much of the macro themes that support the USD strength remain in place, and we’re also looking forward to the all-important Non-Farm Payroll numbers on Friday. In other words, position adjustment based pullbacks are not enough to call the rally over. We’ll continue to keep eyes on mentioned support to hold and the potential for trend resumption as we trade in anticipation of the December 14 FOMC meeting.