Dollar Technical Analysis: DXY Retreats Ahead of FOMC And NFP

The market is wildly optimistic about a Federal Reserve rate hike at the December 14 policy meeting. The meeting standing between today and December 14 takes place this Wednesday, and its proximity to the U.S. Presidential Elections as well as the lack of a post-FOMC press conference has traders looking past this meeting to get to the next.

As we wind down 2016 FOMC meetings, traders are likely to see any hike met with rather dovish language as we head into 2017. The infamous ‘dot plot’ currently has a wide spread of 150bps. However, the most recent dissenters that anticipated the need to hike at the last Fed meeting will not be voting in 2017. The dissenters who were relatively hawkish will be replaced with perceivably more dovish members like Neel Kashkari, ‎President/CEO Federal Reserve Bank of Minneapolis, Charles Evans, Chicago Fed President and Robert Kaplan of the Dallas Federal Reserve Bank President/CEO.

The impending shift to a more dovish set of voting Fed members in 2017 aligns with a development in the options market. Per Bloomberg, for the first time since May, EUR/USD calls are trading at a premium to puts as 1M risk-reversals have flipped positive. Additionally, the March 01 closing low of 1.0865 appears to be strong support for EUR/USD given the price action last week that resulted in a sharp move higher toward 1.1000. 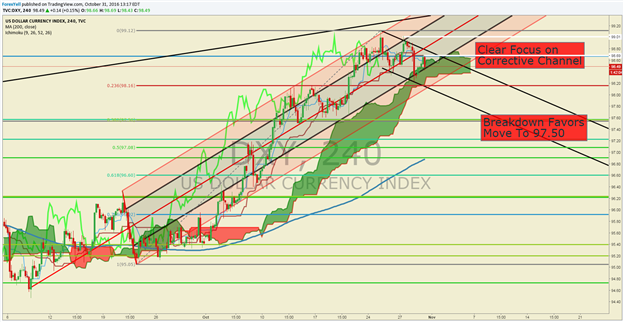 The chart above shows the sharp ascent of DXY from mid-September. There are two trend following indicators worth watching on this chart, Andrew’s Pitchfork & the H4 Ichimoku Cloud. When the price is trading above the Ichimoku Cloud that shows that the path of least resistance is higher. You can see that price is putting pressure on the Cloud and breakdown from this level could easily open up a larger move toward the 38.2% retracement of the September-October zone at 97.50.

Andrew’s Pitchfork also does a fine job of framing price action, and a break of the channel would also result in a break of the Ichimoku cloud, which would turn the bias Bearish.

The price channel that DXY has carved out gives us a helpful road map to wait for a bullish reversal. The series of lower lows and lower highs should be watched, because if the price is unable to break the lower-highs at 98.69 and 99.01, there is little reason to fight the trend.

As noted above, there could be a fundamental shift developing with Fed voting members after the “priced-in” hike in December and the options market is now favoring more DXY weakness than that of the largest counterpart in the DXY, the EUR.