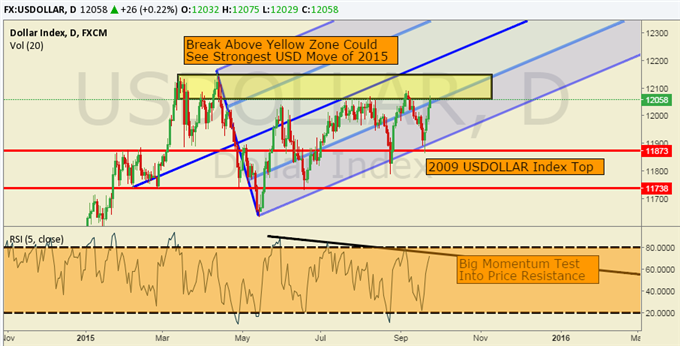 The USDOLLAR didn’t wait long to resume its rally after a disappointing Federal Reserve hold of the interest rate near zero, rather than a lift-off, caused a short-term sell-off in the dollar index late last week. Since then, we’ve seen currencies like GBPUSD break below the 200 day moving average and AUDUSD put a push on the 0.7000 handle as well as multiple USD/EMFX crosses breaking higher signifying the markets distaste for anything not-USD. However, expectations must await a key test of the March 13th, 2015 Daily Range Resistance of 12,064- 12,149. Since March 13th, we’ve effectively moved sideways on the chart by not seeing one daily close above this range in the last 138 trading days. A break above this zone, highlighted yellow on the chart below has the potential to bring the strongest USD move yet in 2015. Therefore, it deserves to have your focus front and center. Conversely, a hard failure at this level could bring a magnificent opportunity at many currencies considered oversold vs. the USD on a reversion to the mean play.

A break above 12,094 would confirm the bullish case and next resistance levels would turn into focus as we approach 12yr highs on the Index. The March 13th and April 13th high of 12,149 and 12,162 respectively would act as swing targets. Beyond those key resistance points, we’d move focus toward the September 2003 high of 12,188. The long side will continue to be favored absent a daily close below 11,865, which would alter the ascending triangle view into a more bearish stance of a potential triple rounded top formation. T.Y.