The Nikkei 225 looks quite comfortable technically speaking as a new year gets under way, well at least if you’re a bull. For one thing the Tokyo stock benchmark looks unthreatened within a newish uptrend channel which began to make its presence felt back on January 4. 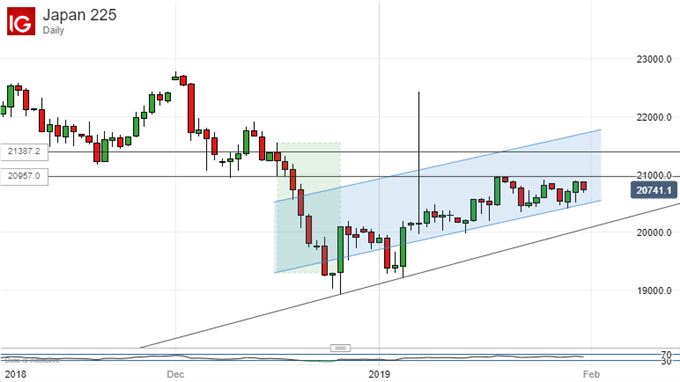 Admittedly the index is still closet to the bottom of that channel than the top, but it has been for most of its existence. That bottom now comes in some way below the market at 20,485.7 and that is probably the first key level which the bulls are going to have to defend.

Still, all will hardly be lost even if they can’t. the broader uptrend line from December 26 remains very much in place and indeed is comfortingly distant from current levels, coming in as it does at 20,045.

Still, solid support is one thing and upside headway quite another.

The Nikkei remains below a band of resistance between 20.957 and 21,387.2. The bulls have tried to break into this band once or twice in 2019 already but, so far, they’ve had no success at all. They’ll need some, and probably soon if the current daily-chart rally is not to lose momentum.

That band represents the portion of the steep falls seen between December 17 and 24 which the index has yet to claw back despite its quite impressive January rise. If the index can be bought back to the top of it then the bulls can strike out toward the previous significant peak, which was December 13’s 21,868.

We may be getting ahead of ourselves slightly here, however. The Nikkei needs to get into or above that resistance zone and stay there durably if solid progress is to be made. For as long as trend support holds, this can probably be thought of as a near-term target.