Helped by a stunning rise on September 18, the Nikkei 225 has smashed through the top of its previous uptrend channel and is now back at highs we haven’t seen since January 24, which is where the peaks of 2018 still hover. 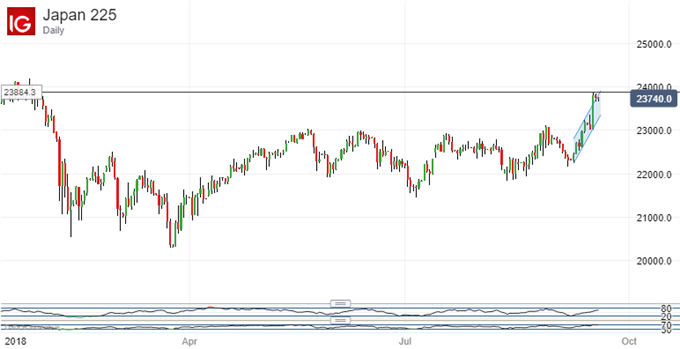 The simple moving averages at 20-, 50- and 100 days remain in chronological order, but they are all now some way below the market.

What all this suggests is that the next few days’ trade could be very interesting. If the bulls decide to push on from here in short order then those signs of exhaustion will only become more acute and the chance of a sharp retracement will hold up.

However, if the index manages to consolidate somewhere between current levels and this year’s peak so far (January 23’s 24,192), then that could be a very encouraging sign.

After all, plenty of investors must be sitting on substantial profit at these levels. If they see no need to cash it out, it implies that they think there could yet be more to come into year-end and perhaps beyond.

Still, the problem with such a rapid upward spurt is that likely support points near at hand can be hard to spot. There will probably be some support around the 23055.6 level. That represents the first, 23.6% Fibonacci retracement of the rise up to current levels from the lows of late March. There is also possibly upward channel support at 23309.1, but that may not endure a stern test. 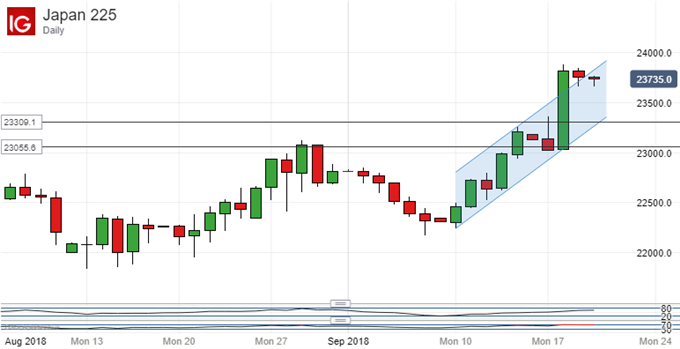 The index looks to be in a rather transitional phase, and the uncommitted could be well-advised to wait and see whether the recent impressive run of gains can stick. It’s a time for daily close watching, perhaps.