What driving market forces should we pay attention to this quarter? See the Q1 Trading Forecasts for our outlook.

When we looked at the DAX last week, the failed breakout during the 3rd week of last month shifted our focus to the low-end of the November/December range in the vicinity of 12940/810. The year started off with some volatility as not only did the market slip below the bottom of the range on Tuesday, but then carved out a key reversal day. So far, this has amounted to a successful rejection at key support.

The range has lost its shape a bit as the market violated both sides of it the past couple of weeks, but is viewed as still having influence. As long as the reversal-day low at 12745 holds, the DAX looks poised for higher prices. Should it fail, there is a very important trend-line running back to the middle of 2016 which is also in confluence with the 200-day MA. The low-12600s would need to hold on any sell-off, or else risk of a sharper decline will increase significantly.

The global leader in stocks, the S&P 500, is on a tear and continues to head the charge. On the flip-side, the euro has been strong and still exerting its impact on European equities. Which factor will win-out, healthy risk appetite or a strong euro? It could be either or neither (should those dynamics reverse). Keeping it consistent with the typical process, we’ll center attention on the technical picture in the DAX and keep other factors secondary in our considerations. 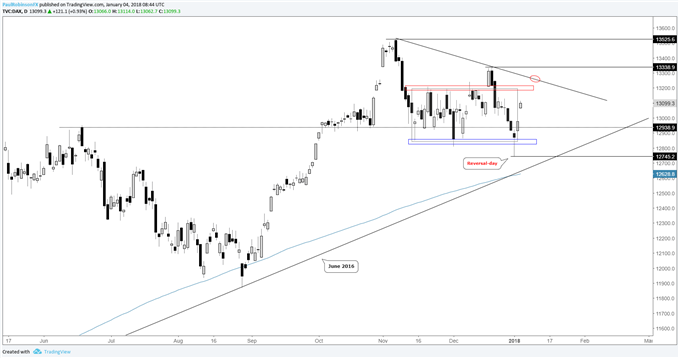