- The British Pound continues to coil in the longer-term wedge that’s been building for the past couple of months, and this has held through a variety of developments on the Brexit-front, both good and bad. Long-term support is around the 23.6% Fibonacci retracement of the Brexit move, which helped to mark the August-low, continues to hold. This has led into a series of higher-lows on both long and short-term basis.

- Retail traders have been holding a bullish stance in the pair for the past two months, and this further complicates topside approaches. As a considerable lack of clarity continues around what Brexit might ultimately look like, and buyers have seemingly ignored positive developments. When a market does not rally on good news, be very careful of buying.

The month of November has been a busy one for the British Pound. Coming into the month, the currency was holding on to a stern topside move as GBP/USD shot back-above the 1.3000 handle. A bit of optimism on the Brexit-front certainly helped, but the bounce started after an inflection on a long-term item of support, and in short order price action had moved up to test Fibonacci resistance at 1.3164.

But this is where the proverbial plot thickens, as the rest of the month has brought a dizzying array of themes as Brexit developments showed up in a very disorderly manner. Price action in GBP/USD quickly gave-up those prior gains over the next week as headlines soured and key officials resigned from Theresa May’s cabinet. But – again as we saw at the end of October, bears pulled up shy of a re-test of the lows, leading to yet another higher-low on the chart. This begs the question of whether the worst is over for the British Pound, and whether we’re seeing a build of long-term support in the GBP/USD pair.

Drawing in a bit closer on the chart, and the higher-lows become a bit more evident as the past week has brought a continuation of that theme. And given the response from retail traders, it appears as though this is helping to bring in fresh buyers to GBP/USD. IG Client Sentiment has grown even more net-long this week as retail traders continue to try to call a bottom. This current setup in GBP/USD may be a bit early for that.

The primary drawback on bullish stances in GBP/USD at the moment isn’t the potential build of long-term support: It’s the lack of responsiveness at the highs whenever positive themes have shown of recent. When buyers made a stand a couple of weeks ago as soon as news began to circulate that Brexit negotiators had agreed upon a draft of an agreement, sellers stood at the ready to hold resistance around 1.3050. This took place again leading into last week, when sellers carved out a fairly clear case of resistance inside of the 1.2900 handle. The 1.2900 handle did get tested again in the latter-portion of last week but, again, buyers failed to sustain the move and prices dropped right back down to 1.2800.

The net of the past two weeks, despite the bold headlines has been further compression of price action; a wedge within a wedge, if you will.

At this point, the pair has a clear lack of direction, and this complicates trend or momentum strategies as there is an absence of prevailing bias. As discussed previously in these GBP/USD technical pieces, traders may want to wait for some resolution of the back-and-forth price action of the past few months before deciding on which direction to push; or whether to push at all. For their part, retail traders have remained fairly optimistic on the matter, holding a net long position via IG Client Sentiment for more than two months now. Given the contrarian nature of retail trader sentiment, this would be a bearish factor for the pair, and an item of concern for those looking at bigger-picture, longer-term bullish plays. 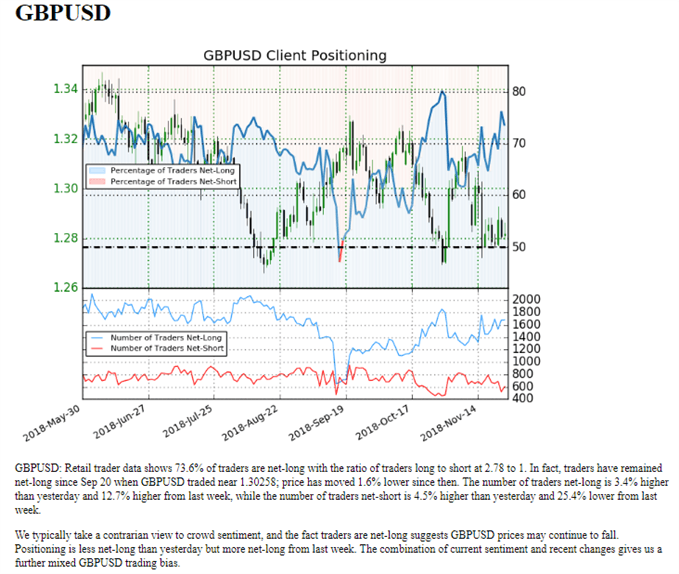 On the topic of drivers: While there has been a bit of progress in Brexit dynamics, it still appears as though matters are far from settled, as Theresa May now faces the difficult test of gaining Parliamentary approval of her plan that’s thus far created a raft of cabinet resignations.

Perhaps most disconcerting, and this was something touched on by our own Nick Cawley earlier this morning; the EU-UK agreement should’ve brought more of a boost to the currency. But, bulls were seemingly unresponsive as focus now shifts to the highly-pensive vote in the House of Commons, now expected for December 10th. Given that this isn’t expected to pass, there are now a plethora of additional outcomes that could be entertained, and this further muddies the water around Brexit for the weeks, and months ahead.

But, perhaps most importantly – when a market doesn’t respond in a bullish manner to positive stimuli, something is amiss, and the cautious trader should take this as a signal of uncertainty that should be avoided until greater clarity can be had.