EUR/USD Technical Analysis: On The Edge of Downtrend Resumption

Just getting started trading the Euro? See our beginners’ guide for FX traders to learn how you can apply this in your strategy!

The Euro has been struggling to find direction against its US counterpart since June began. Its consolidation followed an aggressive downtrend that took place through late-April and May in which it fell below a long-term rising trend line from April 2017. Along the way, bullish reversal patterns came and went but they lacked follow-through. Notable examples were a morning star in early May and a bullish engulfing at the end of it.

Interestingly, options-derived support and resistance levels during its consolidation kept EUR/USD tamed as it was unable to push outside the outer boundaries. The most recent European central bank interest rate announcement on June 14thsent the pair tumbling the most in a single day since October 2015. From here, the Euro is facing a potential point that could lead to a resumption of its downtrend.

Looking at the daily chart below, EUR/USD remains just above the current 2018 lows set in late-May. Coincidentally, this area also closely aligns with the 38.2% Fibonacci extension level at 1.1507. The pair also recently tested this horizontal support on June 21st but failed to achieve a breakout. Meanwhile, the lows set back in November and December 2017 around 1.1718 have been acting as former support now resistance.

A push below immediate support opens the door for EUR/USD to resume its downtrend. In fact, such an outcome further jeopardizes its ascent in 2017 and the long-term outlook could turn even more bearish. Such a case places the 50% midpoint of the extension as the first target at 1.1400. On the other hand, a climb above immediate resistance exposes the June 14th high at 1.1852. 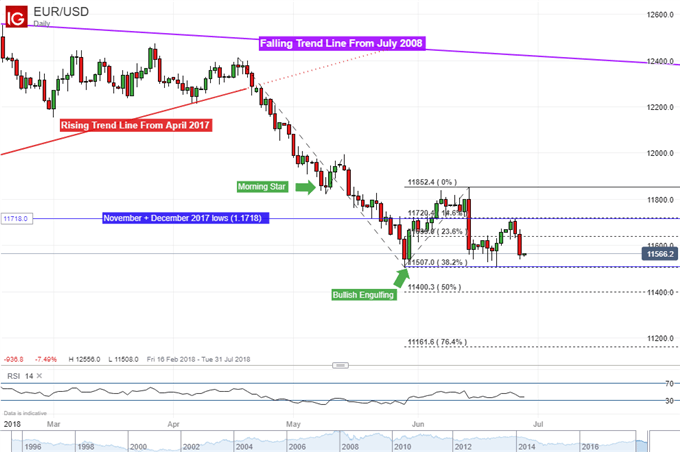