The Euro lifted over 1% on Friday from an important zone of support which runs back the low created two years ago to the month. EURUSD found support at 10460 in March 2015, but has since turned higher from near there on a couple of occasions since – Dec 2015 (10517) and Dec/Jan 2016 (10504) before briefly dropping down to into the 10300s. Despite the drop to those lows a few months back, the area around 10500 is still in play as a big picture inflection point; Friday’s sharp rally is a testament to the importance of this level.

The area around 10500 is also of particular interest as it could constitute the left and right shoulders of an inverse ‘head-and-shoulders’ pattern. It’s a formation we’ve been discussing in webinars, and could remain on the table if the euro can get into gear soon. Pattern symmetry is beginning to come into question as the right shoulder continues to extend; at some point we would need to consider alternative paths if we don’t see higher prices begin shortly.

The neckline of the formation arrives towards the 10800 handle, falling not far below the trend-line running down off the May 2015 high. If the euro can rally and break the neckline and trend-line, a much broader move higher could unfold towards 11300; a measured move target based on the depth of the inverse H&S formation.

In the shorter-term, EURUSD remains stuck in a downward trend since the beginning of last month, a pattern which may be breaking if Friday’s rally can hold and build from here. In the short-term, 10493 will act as the line-in-the-sand; a break below could see a breakdown towards the Jan 3 low of 10340 or worse, and eliminate the beforementioned bullish bottoming formation.

On the docket this week, we have the ECB meeting on Thursday. The central bank is not expected to make any material changes to policy, putting the market’s focus on the press conference with Mario Draghi. On Friday, the U.S. jobs report will be released for February. See the economic calendar for details. 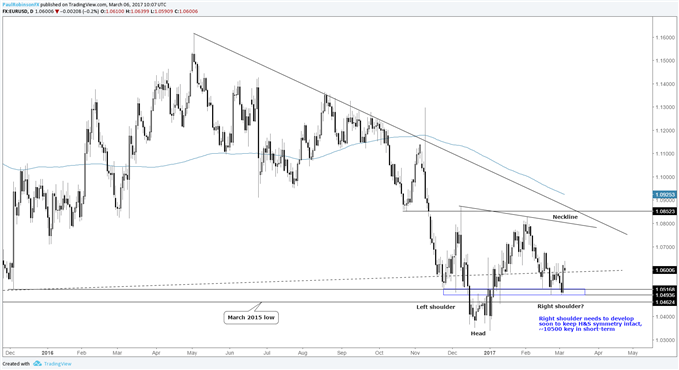