In our last article, we looked at the potential for bullish continuation prospects in EUR/JPY. After the ECB meeting from the week-prior, the pair had ran-up to set a new short-term high; after which a retracement of that bullish move had set-up a ‘higher-low’ around a key zone of support in the range between 121.65-121.95.

This support did not hold; and since then, we’ve had bears envelop near-term price action in EUR/JPY as the pair has shredded down to a deeper, perhaps more pivotal level of potential support. This level around ¥120.00 is very important to EUR/JPY price action; as just ten pips below we have a key Fibonacci retracement level at 119.90 – which is the 61.8% retracement of the 25-year move in the pair (taking the highest high (2008) and lowest low (the year, 2000) of the past 25 years). 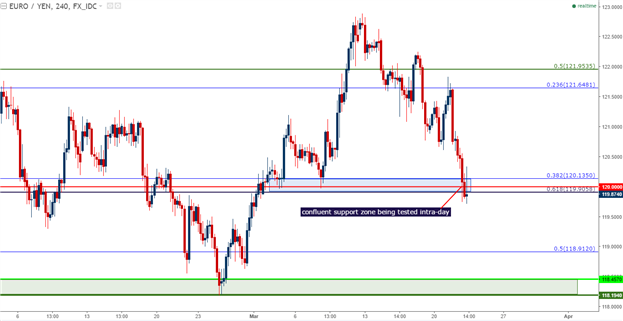 Traders would likely want to avoid chasing the move-lower from here. This near-term burst of weakness could certainly carry continuation potential; but the prospect of selling whilst at a key area of long-term support could be daunting.

For those that do want to sell, they’ll likely want more information before plotting that strategy: Either a continued down-side run that could open the door for utilizing ¥120.00 as ‘lower-high’ resistance; or perhaps letting price action run up to a shorter-term swing point such as ¥120.82. Either of these methods could make for a more attractive way of looking for continuation rather than just chasing the move-lower.

On the bullish side, traders would likely want to see some element of support before looking to get long. If we can get some evidence of such, the prospect of a reversal setup could become considerably more attractive. But – if no support around ¥120.00 – no reversal. Catching falling knives can be a perilous task. 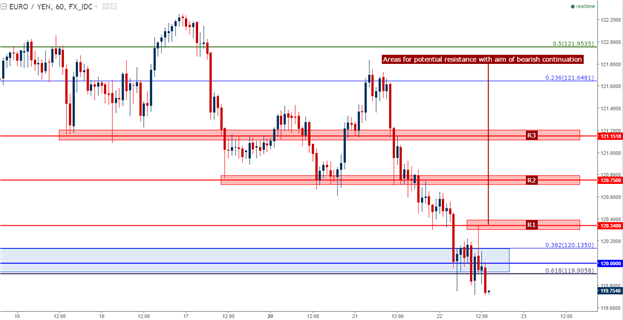