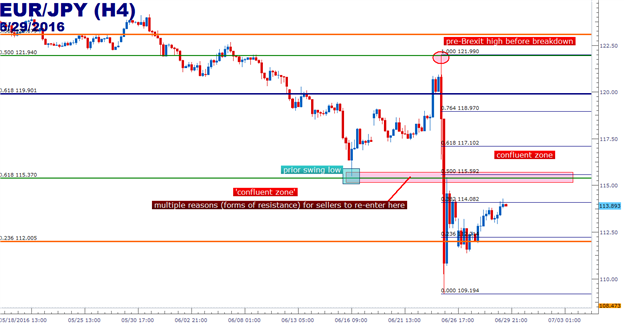 In our last article, we looked at EUR/JPY continuing to operate near a long-term zone of support from 121.50-122.50. Near the middle of this zone, we have the 50% Fibonacci retracement of the major move in the pair, taking the 2012 low up to the 2014 high at 121.94. This had been a key level, offering numerous support inflections in the very recent past; and the importance of this level was accentuated during the chaos around the Brexit referendum. Going into the vote, most markets were reflecting an apparent expectation for a ‘remain’ vote winning-out. Risk assets like EUR/JPY were rallying under the expectation that British voters would elect to continue with the status quo. But as it became evident that this wasn’t likely going to be the case, risk aversion began to show. The swing-high on EUR/JPY came-in within five pips of this Fibonacci level before dropping dramatically for the next seven hours.

And this wasn’t just a standard sell-off: In that seven-hour window, EUR/JPY dropped by -10.5%, which is a gargantuan movement for a currency pair in that period of time. This is a ‘game-changing’ type of move for price action, and this is something that should urge more caution than excitement in traders, as the nearly ~500 pips retracement seen off of those lows is but a mere 38.2% of that post-Brexit move.

For traders looking to jump on the short-side of EUR/JPY, the zone between 115.00-115.60 could be extremely interesting. The price of 115.00 is a ‘major psychological level,’ while 115.37 is the 61.8% retracement of the same Fibonacci retracement we looked at earlier. At 115.48 we have the prior swing low, and a bit deeper at 115.59, we have the 50% Fibonacci retracement of the post-Brexit move; so there are numerous reasons for sellers to re-enter the picture here if we are going to see the down-trend resume.