ASX 200 Rides Trade-War Fears Impressively But May Be Tiring

The ASX 200 is not doing badly out of a period of trade-related risk appetite which has hit other markets. The Sydney equity benchmark reached highs not seen since late 2007 last week as a range of fundamental factors combined to lift it.

Technically speaking the ASX has regained the impressive daily-chart uptrend channel which held from early February and which is in any case only an extension of the long rise up from the lows of late November. Mid-May’s break below the channel bottom now looks entirely spurious.

Still, it’s worth pointing out that the channel top has not faced a stern upside test for quite some time, since early March in fact. Moreover, it looks as though an ‘evening star’ formation can be seen there much more recently, between March 21 and 23. 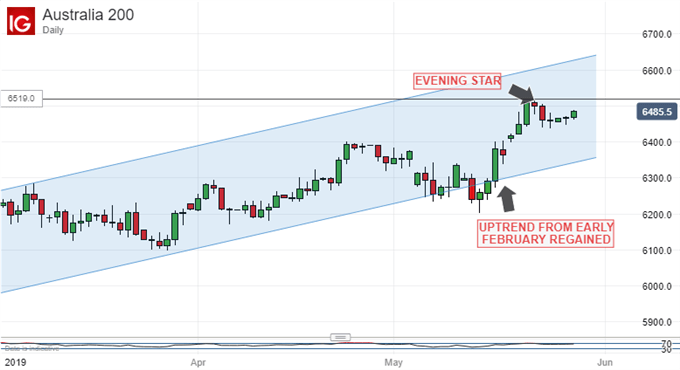 This could well suggest that the uptrend is entering a period of significant exhaustion and, although the price action since has not unequivocally backed this thesis, a series of narrow daily ranges is clearly visible since, suggesting at least a degree of uncertainty in this market.

Reverses are likely to find initial support around late April’s highs in the 6837 region. If these contain the bears then investors may consider a near term test passed and push back to last week’s significant peaks. If they don’t, however,r then it might be as well to expect yet another downside channel test.

Support there would come in at 6336 or so, but even that would probably be comfortingly north of the 6000 mark which has so often proven psychologically crucial for this index.

It’s notable too that the two levels mentioned about match very closely the first and second Fibonacci retracements of the rise up from early February. The third comes in at 6188.9, but a test of that would entail a clear break of the uptrend channel and probably suggest a deeper reversal.