Join our analysts for coverage of all major Australian economic data, and interest-rate decisions, at the DailyFX Webinars.

The ASX 200 remains in a gradual downtrend from its May peaks but may have settled into something of a range.

It bounced on May 29 at an intraday low 5940.6, and that now forms the range’s lower boundary. An upside test seems to have failed this week at 6035.2, which was Monday’s intraday top and the closing low of May 22. 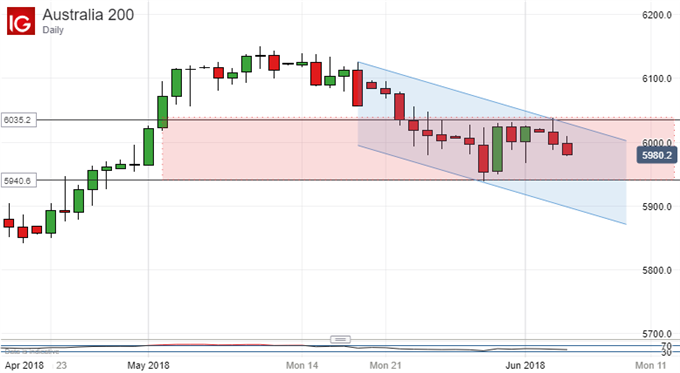 It seems likely that the Australian benchmark will test the range base once more, with a cluster of support from early April between 5982 and 5850 lurking below should it break.

Be aware however that the index faces one or two major fundamental domestic data points which might just see it move independently of the global risk appetite which usually dominates its fortunes. The first will come later Tuesday in the form of the Reserve Bank of Australias monetary policy decision. The RBA is not expected to raise the Official Cash Rate from its 1.50% record low, but a dovish tone from it could support the index.

Official Australian Gross Domestic Product data are due Wednesday, which could also help the bulls’ case if they come in as expected. With that in mind it might be wise for the uncommitted to await these events before getting involved with the ASX.

The technical likelihood seems to be that a downside range test is coming eventually, but this week’s combination of Australian economic events could give bulls a reprieve. However, even if they get one it still looks like a tall order for the index to get back all of the steep falls seen between the 18th and 29th of May. To do that it would need to top 6125 and it doesn’t seem to have the impetus for that.