Are you just getting started in financial-market trading? If so the DailyFX Beginners’ Guide was written for you.

The index was looking ever more comfortably above the psychologically important 6000 level, having topped it by more than 150 points on January 9. Then along comes gridlock and Federal Government shutdown in Washington DC.

This resulted in some global blunting of risk appetite, stumbles for the ASX and some intraday forays back below that 6000 line.

So much for the fundamentals. The technical picture is a little more mixed. On the downside, the ASX has slipped below a convincing uptrend channel which has endured since October 27, 2017. 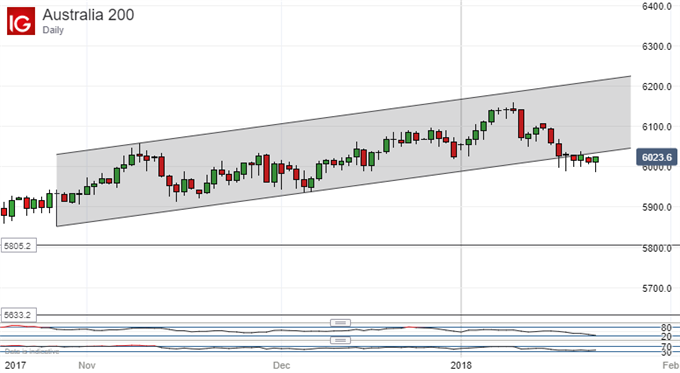 That was a peculiar trading day, incidentally. It saw a broad intraday range but very little difference between the opening and closing levels. This can speak to a period of investor indecision, with the direction of resolution often quite interesting. It certainly was in this case. After October came a long, sustained climb to the highs of early January this year. These were also ten-year peaks.

In falling the index has taken out the first Fibonnacci retracement of its long climb up from the lows of last October. That came in at 6037.3. The second retracement looks safe enough for now. It’s at 5961.6.

It is notable however that the ASX has not fallen very far despite having crossed below the lower boundary of a quite significant uptrend. This in turn suggests that a knee-jerk reaction to US political deadlock is indeed behind the move and that it may well ameliorate once the Federal Government is restored to working order.

However, regaining the uptrend is one thing and challenging the channel top is quite another. At present that top lies more than 200 points to the upside and that, or anything like it looks like a very big ask –indeed channel upside has not been tested since the rejection of 6060.2 all the way back on November 9.

A more valid, near-term channel may now be in place from January’s highs. As you can see its upside is currently under test. Keep an eye on Tuesday’s close. If they can break out to the top, then bulls’ focus will return to the recently surrendered 6,100 area. If they can’t then a clutch of recent intraday lows around the 5990 point will beckon as near-term support.