The ASX 200 is clinging to its uptrend channel but certainly looks weaker technically than it did a week ago.

As you can see from the chart below, January 10 was an interesting day, if not one bulls would much want to revisit. The ASX slipped quite markedly in that session, as did many other Asian bourses. This was puzzling in one important respect- the region had quite a strong Wall Street lead to follow and there was no obvious piece of local bad news to rock the boat. 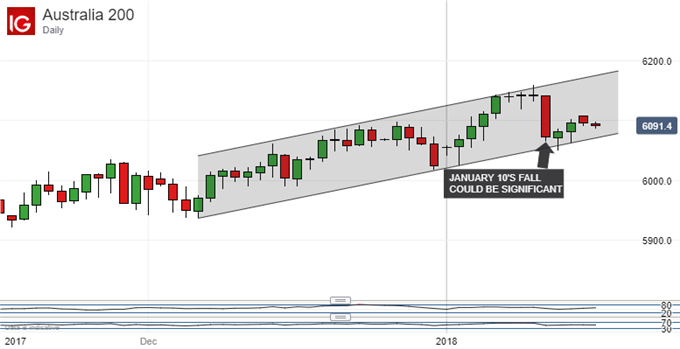 But whatever its cause, January 10’s fall has clearly had an effect. It may be yet to completely invalidate the uptrend channel in place since December 6. But it has already given us an intraday foray bellow the channel downside, even if the channel is holding on a daily-close basis.

And, if we zoom in a bit we can see that the latest upside attempt appears to have fallen some way short of the channel top, putting the focus once again on the index’s lower boundary. 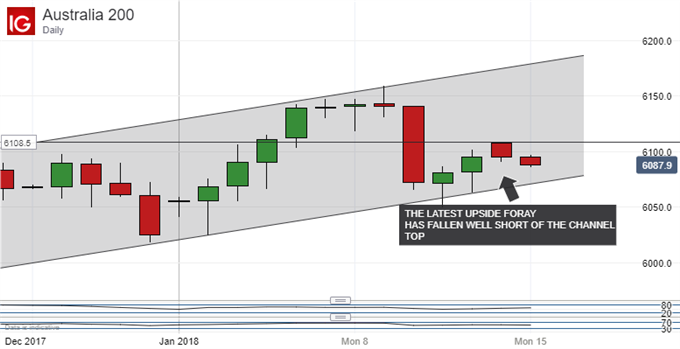 Assuming that downside channel support holds, it may be best to wait a day or two to get the full picture. Monday brings the Martin Luther King Day holiday in the US. This will see both equity and bond markets closed and, probably, some thinning of Asian trade in advance of it.

That support comes in at the 6069 area, perilously close to current levels. The ASX was only 20 points or so above that point at the time of writing (0100 GMT Monday).

However, if we see a decisive break and daily close below the channel then it’s reasonable to assume that the bulls are losing heart- admittedly after a very good run. This need not mean heavy falls. December 29’s close at 6026 was also the intraday low of January 2 and that level may provide some near-term support.

The first Fibonnaci retracement of the remarkable rise from last October’s lows to January’s ten-year highs comes in at 6037.3. The second comes in at 5951.6, although the effects of a decisive fall through the psychologically important 6000 level may render that a tough prop to defend.

But we may be getting ahead of ourselves. The first order of business will be to see whether the current uptrend survives a return to normal US post-holiday trade. And that will have to wait effectively until Wednesday in the Asia Pacific region.

It might be best for the uncommitted to hold off until then.