Get live, interactive coverage of all major Asia/Pacific economic data at the DailyFX Webinars

The gloomy series of lower highs just keeps coming as it has done since the Australian equity benchmark topped out for the year on May 1. Another seems to have been confirmed just this week by the bulls’ failure to push on from Monday’s highs. 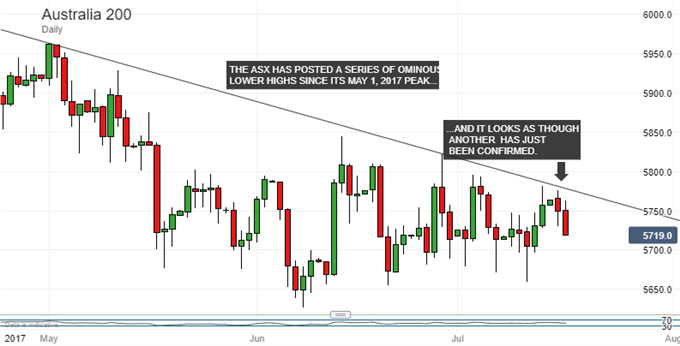 And if that chart isn’t enough to make your bullish heart sink, well, there’s more bad news. Take a look at this horribly persistent pennant formation:

That’s a nasty little run of converging trendlines, usually viewed as a “consolidation pattern.” What it means is that, once it breaks (and we’d be justified in adding “if it ever does” in this case), then the index will return to the trend in place before it formed. In this case that would inevitably mean further falls.

Well, so far so gloomy. But is there any cause for hope here? Well, it must be admitted, not much. There is however some chance that the 20-day moving average could be about to pop above the 50-day.

This could be at least a modestly bullish short-term signal and, moreover, it seems that all the ASX’s moving averages are in less steep downtrends. For the moment, this is “less-bad” rather than “good” news but still, it’s something. Also, if we home in on the index a little more tightly, we see that it is flirting with support levels which have held back bearish forays since the end of June.

The bottom line is that the ASX’s downtrend endures, but there may be some prospect that these levels are forming a near-term base. They certainly bear watching.