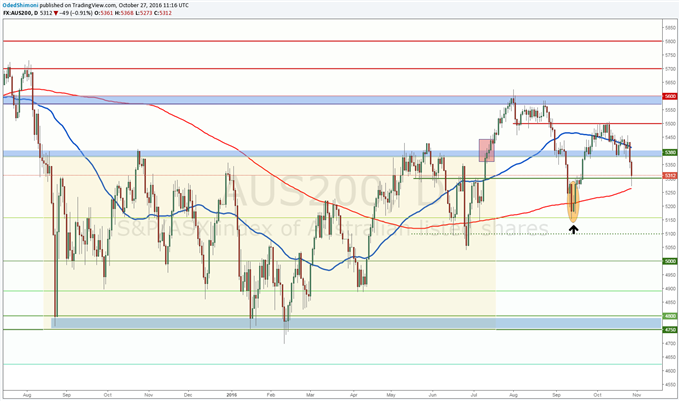 The ASX 200 traded sharply lower after losing the key support level at 5,380.

The index was trading in a well-defined range between the 5,380 resistance and the 4,750 support until July saw a breakout higher, followed by a sharp decline back inside that range.

The index blasted to the upside after forming a bullish “Morning Star” pattern around the 5,200 support, but the 5,500 level proved its merit as resistance and the index retraced to find support at the 5,380 level again.

As we mentioned in the last report, a break to either side appeared key for short term directional conviction.

Indeed, after moving below 5,380 the index declined sharply, and the drop came to a halt around the 5,300 support level.

At this stage, the ASX seems to be at a crucial decision point. After forming a series of higher highs and lows, the failure to hold above 5,380 appears to be implying a lower high which shifts our attention back to the reaction around the level.

A hold below 5,380 may be interpreted as a bearish sign, but further downside momentum might be required to break below 5,300 followed by the September low around 5,150. If that scenario comes into play, it could be said that bears are firmly in control.

Until then, the 5,300 level could be seen as a level to watch for short term directional plays, with the bias appearing to be tilted slightly to the downside in the short term as long as price is below 5,380.

A reversal for a move higher will need to take out 5,380 and the next resistance level seems to be 5,500 before threatening the last high around the 5,600 level for full blown bullish conviction.