UK Prime Minister Boris Johnson’s ambitions for a swift exit from the European Union took a hit today when a British judge ruled that he could not prorogue parliament – in other words, he could not suspend UK parliament in order to force through a no deal, “hard Brexit.”

If only temporarily, fears of a no deal, “hard Brexit” have subsided as march down the path towards economic ruin for the UK has been slowed. Last week’s Q2’19 UK GDP report was surprisingly weak, with the quarterly growth rate contracting for the first time in seven years amid a dramatic fall in both imports – the weak British Pound has sapped UK consumers’ purchasing power – and exports – the uncertainty over the near-term business environment is making operational and production planning incredibly difficult for firms of all sizes.

What’s Next for the British Pound and Brexit?

The mere prospect of the UK leaving the EU has been extremely harmful to the British Pound. Losing more than 20% against most of its major counterparts since the June 2016 Brexit vote, the British Pound is unlikely to recover any significant value so long as the UK is poised to leave the EU.

There is little reason to think that, unless a snap general election is called sometime over the next few weeks, that there is significant scope for recovery for the British Pound. Technical studies of both GBPUSD and GBPJPY suggest that any near-term gains are simply countertrend moves in the context of the broader, multi-year declines. 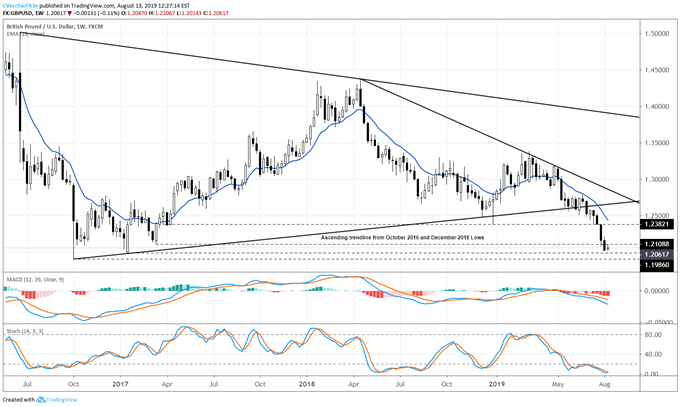 A look at the weekly timeframe highlights the destruction that Brexit has wrought upon the British Pound. Since Boris Johnson became UK prime minister, the GBPUSD has accumulated losses each week, and the latest turn lower saw GBPUSD breakdown through the March 2017 low at 1.2109. Now, the January 2017 low is in focus at 1.1986, with the post-Brexit vote in October 2016 coming into focus shortly thereafter at 1.1905. 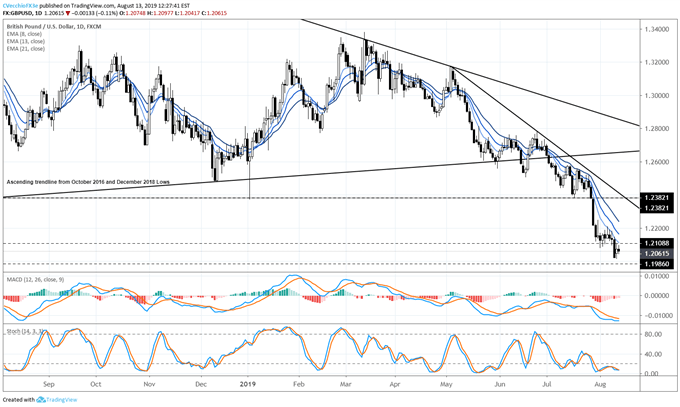 In our GBPUSD technical forecast last week, it was noted that “as is often the case with symmetrical triangle breakdowns, there is a likelihood of a return to the base of the triangle; in this instance, with a bearish break occurring, we’ll be looking for GBPUSD to return to the downside base of the symmetrical triangle, set in October 2016, at 1.1905 over the coming weeks.”

With bearish momentum firm on not only the weekly timeframe but the daily as well – price remains below the daily 8-, 13-, and 21-EMA envelope while both daily MACD and Slow Stochastics trend lower in bearish territory – GBPUSD remains on course for a return to the October 2016 low at 1.1905. Only a close above the daily 8-EMA would throw into question the notion that the path of least resistance remains to the downside for GBPUSD. 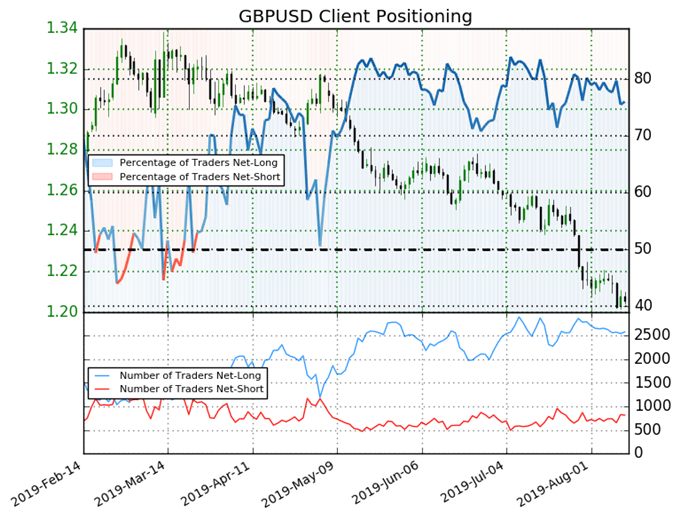 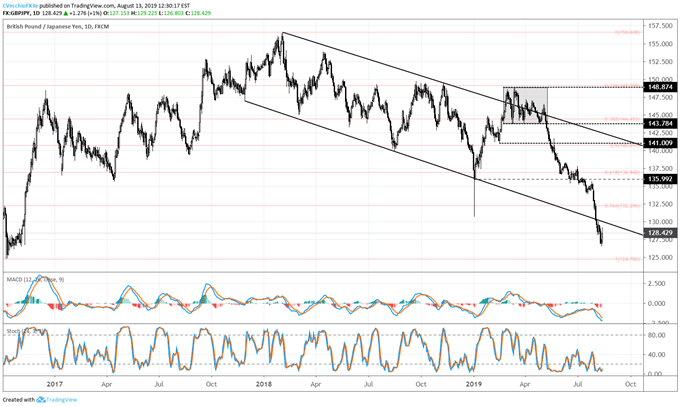 After spending most of the past 18-months trading in a downward sloping channel, GBPJPY prices have recently hit terminal velocity, falling through channel support on their way to fresh yearly lows. In context of price action since the October 2016 post-Brexit vote low, there is little meaningful support between current price (128.43) and the post-Brexit vote low at 124.79. 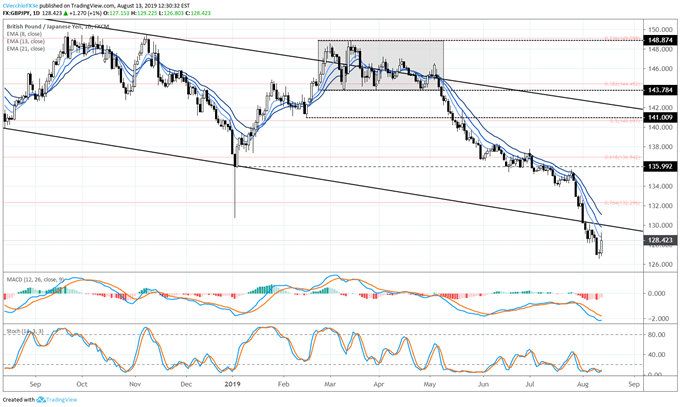 With the US-China trade war moving back to a state of détente, global equity markets have been buoyed, and in turn, safe haven assets like precious metals, US Treasuries, and the Japanese Yen have all been sold off. As such, it is possible that a morning star candle cluster is forming, evidence of a near-term bottoming effort.

The key aspect of the recent downtrend is that price has been holding below the daily 8-EMA on a closing basis since July 23. As long as GBP/JPY prices are sustaining a move below the daily 8-EMA, and more broadly, the daily 8-, 13-, and 21-EMA envelope, there is no good reason to think that the rally is anything other than a countertrend move. Traders may want to look at opportunities to sell rallies as a result rather than buying the low; a potential turn comes above the daily 21-EMA, which price has not closed above since May 6. 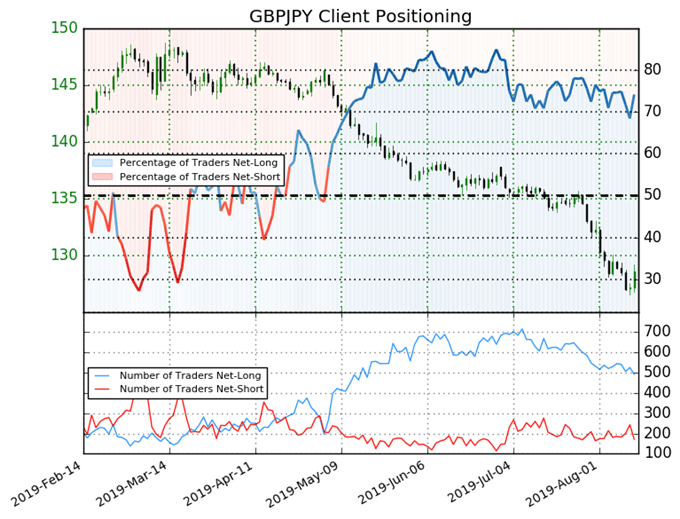