The Australian Dollar could be on the verge of a major breakout against the US Dollar, potentially building on its relentless 31% surge from the March low (0.5506) to fresh yearly highs.

The monthly RSI has accelerated back above its neutral midpoint for the first time since January 2018 after falling devilishly close to oversold territory in March 2020, mirroring the oscillator’s development in early-2003.

Furthermore, bearish divergence in 2001 and earlier this year seemed to signal the end of a cyclical downturn in price. Both times the RSI failed to follow price to lower lows, AUD/USD rates set major bottoms – September 2001 (0.4823) and March 2020 (0.5506).

With that in mind, a convincing close above key confluence at the 61.8% Fibonacci (0.7207) and 6-year downtrend could ignite a period of sustained AUD strength and signal a significant shift in market sentiment. 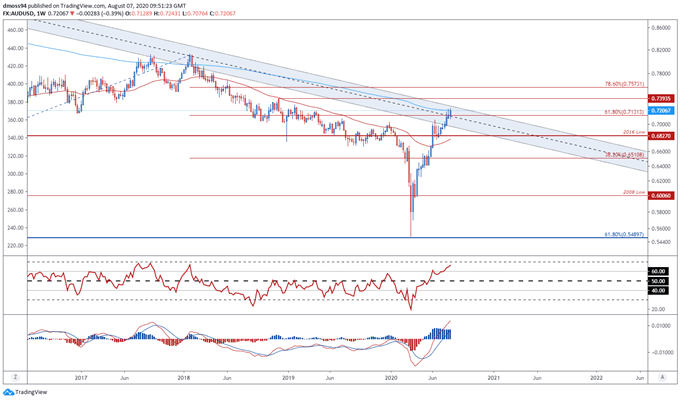 Zooming into a weekly timeframe reinforces the bullish outlook for the Australian Dollar as price bursts through resistance at the 61.8% Fibonacci (0.7131) and tests the sentiment-defining 200-week moving average (0.7213).

The MACD indicator’s explosive surge to the highest levels in over 4 years suggests price may extend its 7-week ascent.

Moreover, the RSI looks set to climb into overbought territory for the first time since the AUD/USD exchange rate was above parity in April 2011 (1.0977). 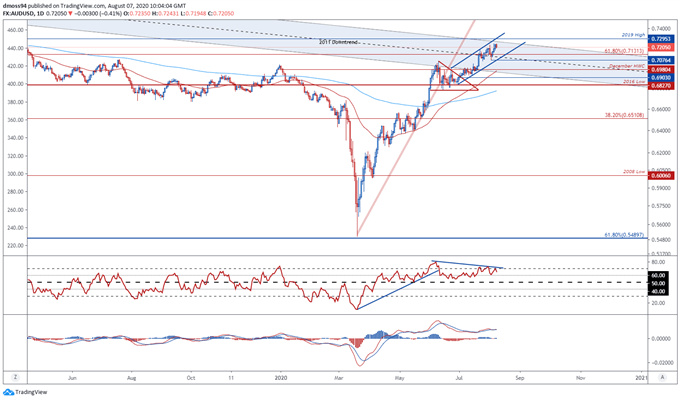 Although higher timeframe analysis suggests a bullish outlook for AUD against USD, daily price action hints at underlying exhaustion in the recent uptrend. Given the RSI failed to follow price to higher highs.

However, AUD/USD rates remain constructively perched above the 61.8% Fibonacci (0.7131) and monthly low (0.7076) suggesting a near-term pullback may precede the next impulsive move.

Prices may slide back towards Ascending Channel support in the coming week, alongside the RSI and MACD indicators regressing towards their respective midpoints.

Conversely, a break of support at the August low (0.7076) would probably fuel further declines and could see price fall back to the July low (0.6877). 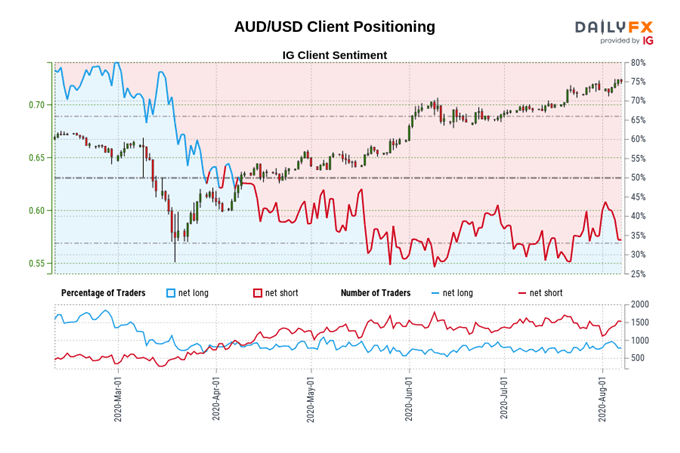