Japanese Yen Technical Analysis: USDJPY Prepares, But For What

New to the Japanese Yen trading world? Our beginners’ guide is all yours

On a fundamental level the Japanese Yen should probably be in a little more trouble against the US Dollar than it is.

The Bank of Japan is committed to “powerful monetary easing” in the oft-spoken words of its Governor, Haruhiko Kuroda, until annualized consumer price inflation tops 2%. Well, it’s now at 0.7% and holding so that easing could yet be with us for years. Meanwhile the US Federal Reserve has raised its own interest rates from their post-crisis depths. It’s still expected to do so once again in December and to continue the process in 2018 if the economics permit, albeit gradually. 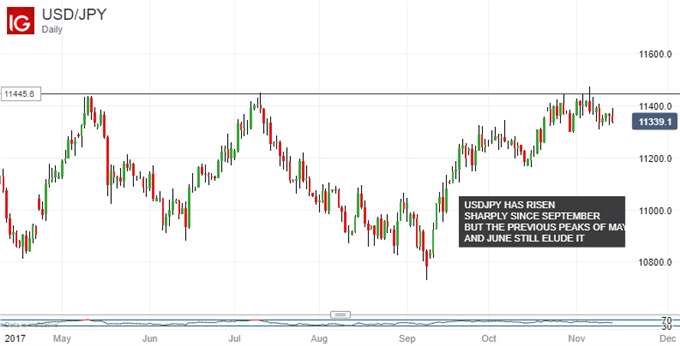 These were made in May and June and, sure enough, the current rally seems to have lost conviction at about the same level. Dollar bulls have some cause for hope though. This time around USD/JPY has held up for a lot longer than it did on either of the two previous occasions. Back then the pair barely touched the highs before collapsing in short order.

This time the range top looks far more consolidative, begging the question of what might come next once that process ends.

Well, USD/JPY seems to have settled into a trading range between 113.00 and 114.71. Note though that the range top is formed of a single intra-day high and the ’real’ one may be somewhat lower. The 114.15 area looks more significant in terms of recent daily closes. If that range holds then it may represent a modest, stale-bull shakeout after which the climb might very well continue.

However, there is of course an alternative scenario. USD/JPY bulls will need to show resolve to keep a bearish “head and shoulders” formation off the daily chart. 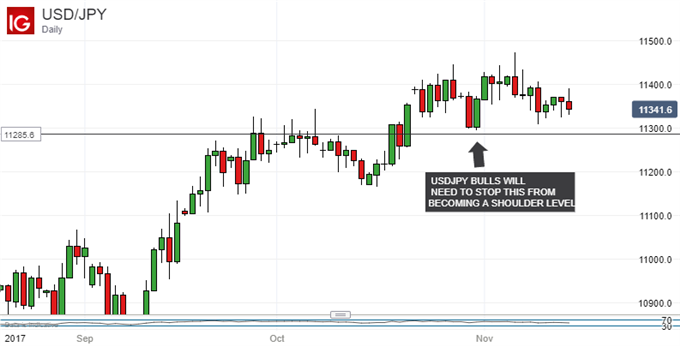 This would become an immediate and obvious danger if the current range base fails to hold, and should be watched for. While not my preferred outcome at present, such a formation would put the entire climb from September in doubt.

The British Pound has made the news this week as political turmoil around Brexit continues to swirl. However, you might not necessarily know it from a long at the GBP/JPY chart. There the Pound has held up quite well, for many of the same interest-rate differential reasons which have supported the US Dollar. For all the UK economy’s current woes.

GBP/JPY bounced at the 146.86 level in early October and has since settled into a new, higher range mid-way between that level and 2017’s peak of 152.83. While momentum indicators suggest that the Pound is safe enough at current levels, it might be wise to stick with playing that narrow range for the moment as the British currency will inevitably remain extremely vulnerable to political newsflow. On that basis it is extremely unlikely to reward any heroics. 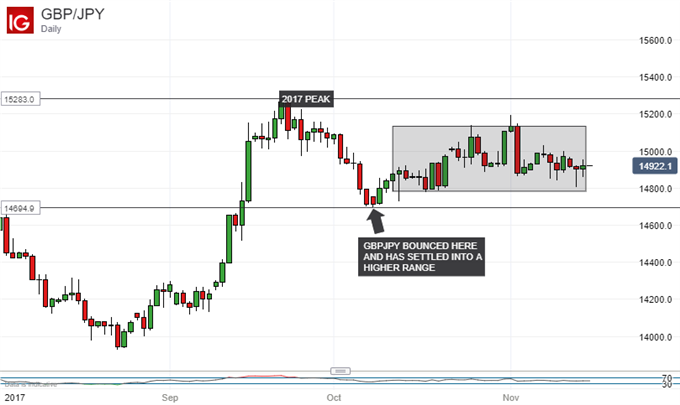