Just getting started in USD/JPY trading? The DailyFX beginners’ guide is here to help

At first glance, the Japanese Yen is having things very much all its own way against the US Dollar.

USD/JPY remains in an obvious downtrend from the last significant peak – July 11’s 114.06. On a daily closing basis, that peak was itself lower than the previous notable top, May 10’s 114.30. Another bad sign for any remaining bulls. 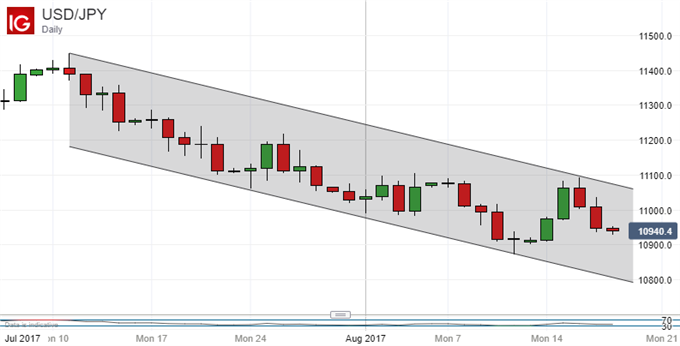 Moreover, recent falls are only an acceleration of the more gradual downtrend that’s been with us all year. 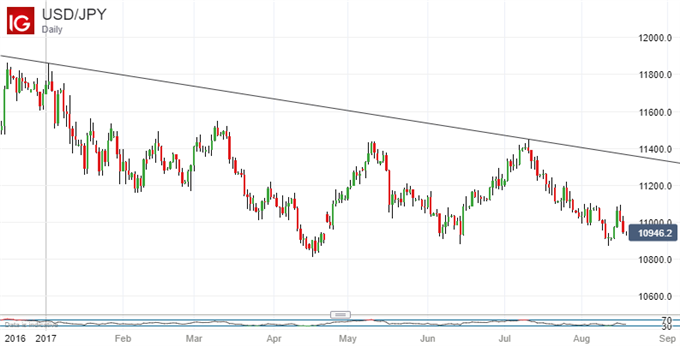 However, for the short term it might be a good idea to keep an eye on the June 14 intraday low at 108.80. That’s just about where the latest foray lower bounced between August 11 and August 14. It seems to be the most significant obvious barrier to progress lower now. 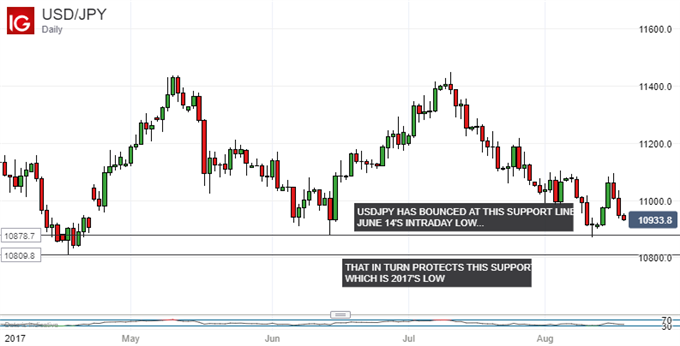 It’s easy enough to see why this might be so. 108.80 is the lowest point for the currency pair short of the outright 2017 nadir of 108.11, hit on April 17. If you are uncomitted at this point it might be a good idea to wait and see if these two key support levels survive this latest attack before taking a position.

If the 2017 lows do give way this time then the whole climb up from last November’s 101 area will be back in obvious question. Even if they don’t then the familiar downtrend of this year will certainly remain in place, but it will still be a gradual affair. That said a break lower at some point looks inevitable unless the bulls can show a lot more fight than we’ve seen recently.

The Yen has done even better against the British Pound this month than it has against the Dollar. Poor old sterling gets you about six fewer Yen now than it did at the start of August. GBP/JPY remains a lot further away from its 2017 lows than USD/JPY. They were made mid-April in the mid-135 area, still a long way down. Of course we may get back there yet but for the moment, the Pound’s Relative Strength Index suggests that selling may have got a little ahead of itself. The cross could now be due a little pause for reflection, if not for any remarkable fightback.