EUR/USD Expected to be Most Volatile Currency on ECB Decision, Beware of Surprise 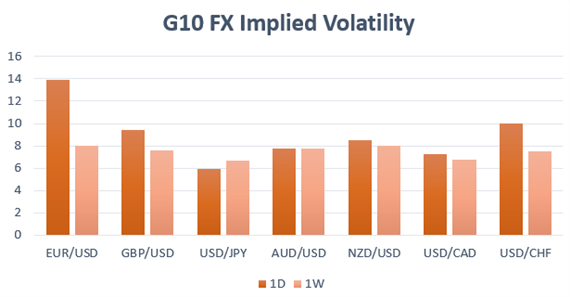 Euro Expected to be the Most Volatile Currency

EURUSD| Overnight EURUSD implied volatility have surged to a fresh 2019 high as the expiry covers the ECB risk premium, alongside tomorrow’s US GDP. Overnight implied vols hit a high of 14.031, which in turn sees EURUSD ATM break-evens = 69pips(meaning that for option traders to realise gains, the spot price must see a move of at least 69pips). Alongside this, risk reversals have continued to head lower -0.475, suggesting that option traders are seeking greater protection for EURUSD losses on anticipation of a dovish ECB as well as a firm US GDP report. Alongside this, eyes will be firmly placed on the 1.1100 as a break below could exacerbate further downside pressure in the pair. 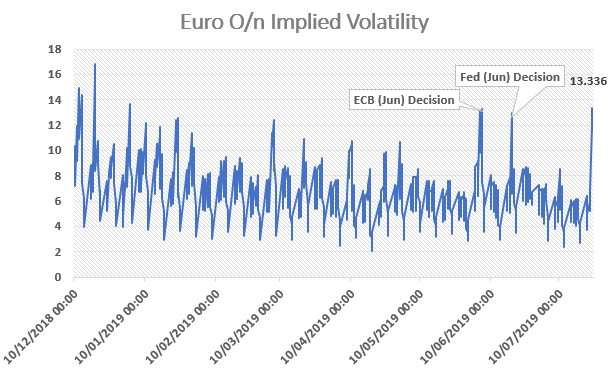 The ECB monetary policy decision is scheduled for 12:45BST (07:45EST), where expectations are for the ECB to stand pat on interest rates, however, money markets are roughly 50/50 on whether the ECB lowers the deposit rate by 10bps to -0.5%. That said, if the ECB were to wait until the September meeting, they could prep markets by altering their forward guidance and state that interest rates can be at present or lower levels, while also signal that they are willing to restart QE if required. Alongside this, the focus will also be on President Draghi’s press conference from 13:30BST (08:30EST)

CHF|The Swiss Franc is trading at its strongest level against the Euro in over 2yrs, which is of course not desired by the SNB who actively intervene in order to weaken the currency. While the SNB are seen to typically move in lockstep with the ECB, given that interest rates are already deep in negative territory, there may be some limits to what the SNB can actually do in response to ECB easing, thus there is a risk of a sharp appreciation in the CHF, particularly if the equity markets roll-over on continued fears over trade wars.Overnight implied volatility in USDCHF rose 0.829 vols to 10.029 = break-even straddle at 51pips.