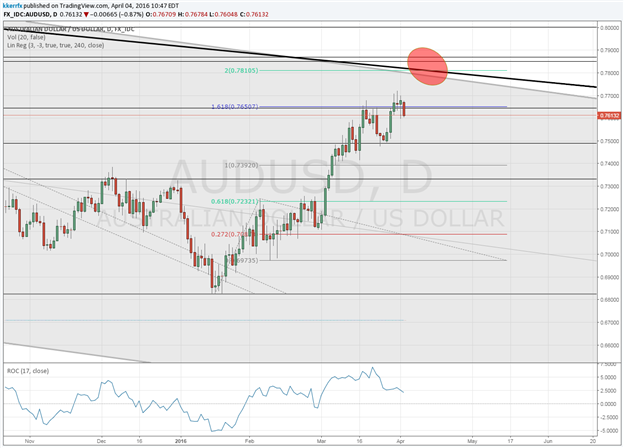 My colleague Jamie Saettele has been writing about an interesting potential cyclical influence in AUD/USD this month. He writes, “The 2nd week of April is lining up as a potentially important pivot in time. The 1993 and 2001 lows (latter is the all-time low) are exactly 392 weeks apart. 392 weeks from the 2001 low is the week of the October 2008 crash (the low was 3 weeks later). 392 weeks from the October 2008 crash is the week of April 11.” Time is running out for this to be a low of significance. Anything is still possible, but the persistent strength over the past few weeks suggests we are more likely to get an inversion high (if this cycle is indeed going to influence the exchange rate). Inversion is just cycle jargon for when a high occurs when there should be a cycle low and vice versa.

Price wise my idealized zone for a potential reaction high of significance is between .7800 and .7870. This marks a fairly tight confluence of the top of the 1-year standard deviation channel, 12 square root relationships from the YTD low, the 200% projection of the January – February range, an internal trendline connecting the August 2013 and January 2014 lows, the 38% retracement of the 2014 – 2015 decline and the 78.6% retracement of the May to January move lower. If we get up there over the next couple of weeks or so I will be looking for a signs that the market is topping out. It is worth pointing at that the three week rate of change recently touched its highest level in over four years which suggests this move higher is getting a bit ahead of itself. Sentiment as measured by the Daily Sentiment Index is also near contrarian extremes as it was at 84% bulls as of Friday’s IMM close. If it gets over 90% as spot gets into the .7800 area I would be more confident of a potential turnaround. The curveball would obviously be if we get aggressive weakness over the next week or so as it would set up a potential low into the turn window, but we’ll cross that bridge if and when we get there.