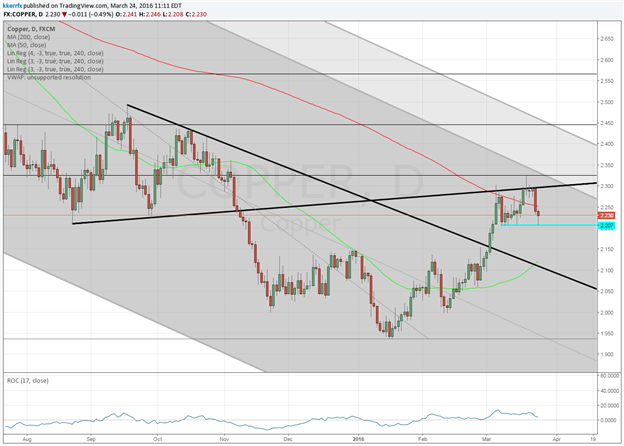 End of Quarter Should Bring Answers for Copper & Crude

End of Quarter Should Bring Answers for Copper & Crude

The end of the 1st quarter is shaping up to be pretty interesting for commodities. Oil & Copper are stalling at levels that have proven sticky in the past. Crude, for instance, has failed every time is has gotten to the 200-day moving average over the past year and on Tuesday turned down about a quarter away from that widely watched resistance. Copper has had trouble with the top end of the resistance zone I mentioned last week as the absolute high was the 38% retracement of the May – January decline and the closing high occurred right on the internal trendline connecting the August and September lows. Are we seeing the long-term downtrends reassert themselves in these commodities or are the interim uptrends just taking a breather (from an overextended condition) before resuming higher?

It is still too early to tell, as the weakness that has followed in both instruments has not broken anything of significance - at least yet. I think the end of the quarter and the flows that it brings should give us an answer one way or the other. In Copper, the big level of importance on the downside looks to be the range lows of the past few weeks around 2.2000. A close below there would be strong evidence that the broader downtrend is indeed trying to reassert itself and open the door to a more aggressive decline in April. A close over 2.3000 or traction above 2.3260 would be a strong signal that the metal is embarking on something more important on the upside. The volatility in crude requires a little more caution. Initial support is seen around 38.00, but it would probably take aggressive weakness under a confluence of support levels around 35.00 to signal a primary downtrend resumption. Any sustained push over the 200-day (just under 42.00) moving average would be an important change in behavior that opens the door to another aggressive move higher.