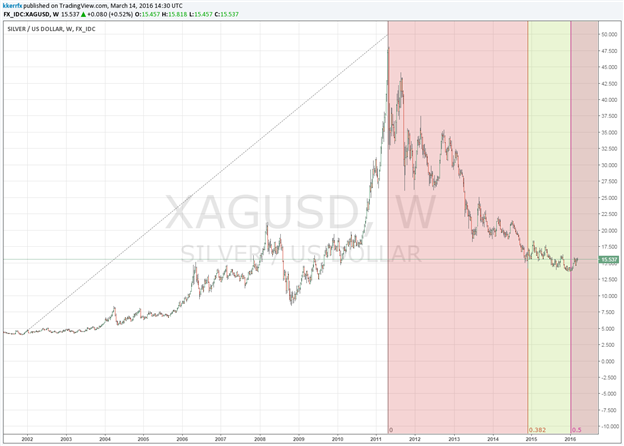 When analyzing precious metals, I tend to spend most of my time on Gold. My cyclical view in Gold has been that the start of the second quarter and the middle of the fourth quarter would prove important for the yellow metal in 2016. I have been looking for a secondary low of some importance next month, but that is contingent upon the metal encountering a meaningful period of weakness before then. If it continues to rally over the next few weeks, the risk is that we get an “inversion” and put in a decent high late in 1Q/early 2Q.

I was on vacation last week. Whenever I have some time off I like to look at charts and see if I can find something important that, I may have missed. Boy did I! If I had spent more time looking at the Silver spot charts these past few months I would have discovered a beautiful display of timing symmetry at the low in January as it marked the 50% retracement of the time elapsed between the low in November of 2001 and the high in April of 2011. What makes the reversal that occurred from there so potentially important is that the secondary low in November of 2014 occurred at the 38% retracement in time of that same ten-year advance. Therefore, we have double lows from important long-term timing symmetry. If anything points to a more important bottom, being in place for me it is this type of timing convergence. I now need to see price action further confirm this thinking. I am watching the potential inverse head & shoulders pattern closely on the daily chart. Spot has had a hard time with the neckline of this potential pattern over the past few weeks as it has failed several times there. A close over the neckline at 15.55 and then the October highs around 16.35 would be strong technical evidence that the long-term trend has indeed changed for the metal. In the near-term, my concern lies with the potential cyclical influences from Gold going into the end of the quarter, but only aggressive weakness under 14.15 would start to signal the broader basing view was premature.