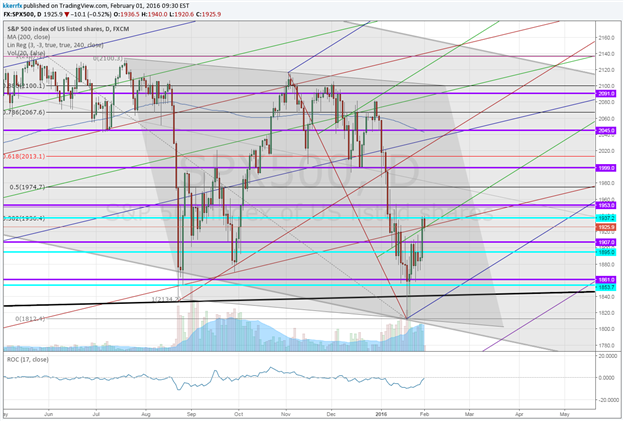 The S&P 500 has reached levels where we should learn a lot about the true intentions of the latest recovery. On January 20 the index reverse from just above 1800 which was near a convergence of the measured move of the May - August decline and the bottom of a channel from the trendline connecting the July and November highs. The positive spin on things would be that this turnaround occurred almost precisely where you would want to see the index find support if it is indeed still in the midst of a broader uptrend.

However, the big glaring difference this time around that has me wondering if this really is the case is that the S&P 500 is working its way lower from a failed lower high in November after several quarters in 2015 of deteriorating internals. This is not an end all be negative setup (nothing is in technical analysis) as we had a lower high in 2011 when the index corrected sharply before screaming higher, but there was not the negative breadth issue then either. If the market really is changing it stripes here for the worse then I would expect important resistance between 1935 and 1955 to cap this recovery. This area marks a confluence of the 38% retracement of the May – August decline, the 3rd square root relationship of the year’s low and the 4th square root relationship of the all-time high. It is pretty important resistance in my view and a move through 1965 (fudge factor of about 10 handles) would be a strong sign that the bearish majority have been fooled again. On the other hand, a clear failure at resistance followed by weakness under 1875 would suggest the move over the past couple of weeks has just been an oversold bounce and would open the door to another downside acceleration to at least re-test the year’s lows.