S&P 500: Everybody Too Bearish Too Soon? 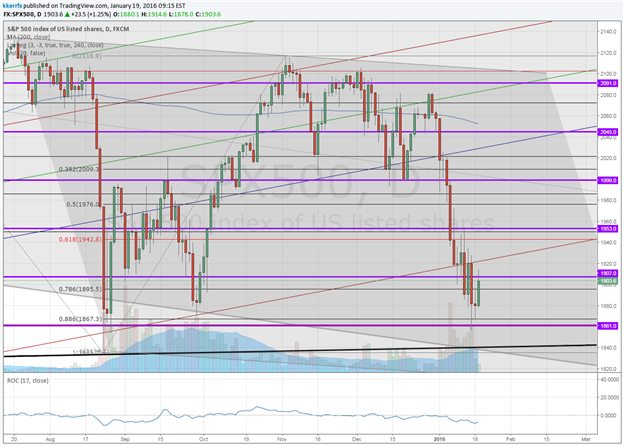 The lead story on the nightly news Friday was about equity market weakness. This combined with some of the dire news covers over the weekend, AAII bullish sentiment at its lowest level in over 10 years and a spike in searches for “sell stocks” on Google to a seven-year high and it wasn’t hard to imagine that US equity indices might try and rebound aggressively. We certainly seem to have gotten that with the S&P 500 looking to open well above 1900 this morning. The 1955 area looks to be the key level on the upside over the next few days as traction above there would alleviate some of the immediate downside pressure and potentially open the door to a more important move higher.

Even if the decline of the past few weeks is the start of a more important bear market, as so many suggest, it is not inconceivable to think that some aggressive rallies could materialize. Unlike bull markets which have a tendency to grind higher, bear markets usually unleash a so called “traders environment” that entails large swings in both directions. In 2008 and 2009, for instance, when US equities were in the midst of a bona fide bear market the indices were down around 10% on the year by MLK day and reversed more than 9% both times afterwards. I am not saying history will repeat, but it is a good warning on the pitfalls of getting too bearish at the start of the year.

My cyclical analysis suggests next week could prove important for a variety of markets including equities. Continued weakness under 1870 would have me looking for potentially important low, while a continuation of the current recovery would set up a possible secondary high of some kind.