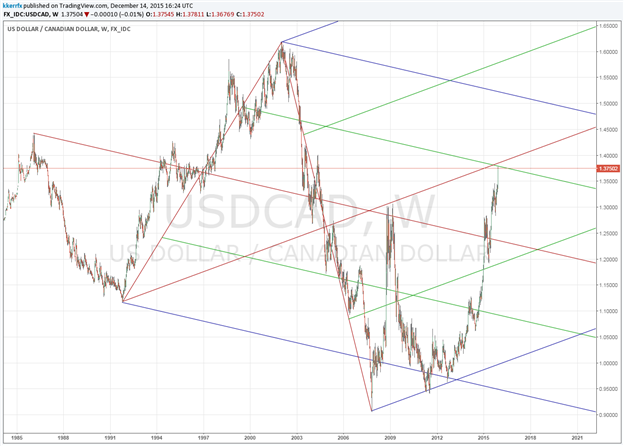 USD/CAD broke above the 61.8% retracement of the 2002 – 2007 decline around 1.3460 earlier in the month, and has not looked back. The break of this key resistance coupled with the fact that the exchange rate ignored an important timing confluence late last month pointed to an important push higher. Now I am starting to wonder if the rate has maybe run its course – at least temporarily.

I say this because on Tuesday the exchange rate traded up near 1.3800 and then almost turned on a dime. There is a lot of interesting stuff around 1.3800/50, but what particularly peaks my interest is a wonderful convergence of long-term pitchfork lines there. The market turned around yesterday from the internal parallel of a pitchfork drawn from the 1986/2002 highs and the 1991 low, but slightly above that is the median line of the pitchfork drawn from the 1991 low through the 2002 high and the 2007 low. The 161.8% extension is also at 1.3830 so this looks to be a meaningful zone of resistance. With sentiment now at contrarian extremes as measured by the DSI (CAD DSI sub 10% bulls), it would not surprise me to see a decent counter-trend move materialize from somewhere around 1.3800 in the days ahead.

Now of course we have the Fed decision and some BOC speak before that so volatility should pick up over the next day or so. However, for me it would take a close after tomorrow north of 1.3850 to nullify the resistance zone and set the stage for another important leg higher.