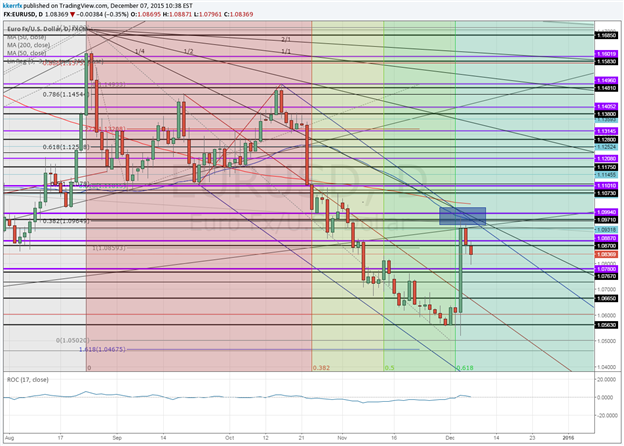 I was on vacation last week and it seems the correlation between my holidays and big moves in EUR/USD remains incredibly high. I was actually not that surprised to see the reversal in the euro as it coincided with the 61.8% extension of the time elapsed between this year’s low and the late August spike high. Fibonacci time relationships have been incredibly influential this year in the euro as almost every big turn has coincided with one. Obviously, the big question here is was last Thursday the start of a more important run high or just a one off short covering rally? I tend to favor the former because of the seasonal tendencies. December has been historically very positive for the euro and the D-mark before that. If the euro is going to undergo a more important move higher then it seems it have a lot of things going for it.

All that said, EUR/USD did stall out where is needed to for the medium-term bearish case to remain intact as Thursday’s high coincided with the 50-day moving average. It was also the middle of a pretty clear confluence zone which included the 38% retracement of the August – December decline, the 5th square root relationship of the year’s low and the 1x4 Gann angle line of the August high (among other things). In order to get excited about something meaningful here developing on the upside then I am going to need to see 1.0995 taken out convincingly. Immediate support in the euro is seen around 1.0765, but I would probably need to see a move sub 1.0700 to give credibility to a broader downside resumption.