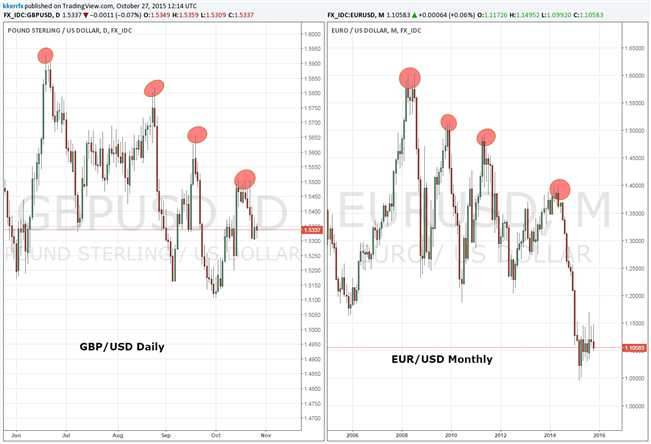 GBP/USD: Fractal of the Euro in the Pound?

The pattern setting up on the GBP/USD daily chart is an interesting one. It reminds me a lot of what the monthly EUR/USD looked like in May of last year right before the exchange rate broke down. This pattern of an absolute high followed by three lower highs is actually a variation of the “Rule of Four” concept written about by WD Gann.

The Rule of Four essentially states that the 4th attempt on any important support or resistance level will usually result in a significant market movement when that support or resistance level is penetrated. A variation of the rule can be used to identify potential trend reversals. Simply look for a high followed by three successive lower highs after a strong uptrend. When this type of price action materializes after a strong trend, it is often a reliable precursor to an important decline (as was the case in EUR/USD last year).

What makes this particular occurrence in the pound so interesting is that three of the highs over the past few months have coincided with important timing related to July 2014 – April 2015 decline (read HERE). All this suggests to me that the GBP/USD is getting vulnerable to a more important decline. The mid-month closing low around 1.5250 is an initial downside pivot, but traction under 1.5100 is really needed to confirm that a more important breakdown in sterling is indeed underway. A move through last week’s highs around 1.5510 would invalidate the potential negative pattern.