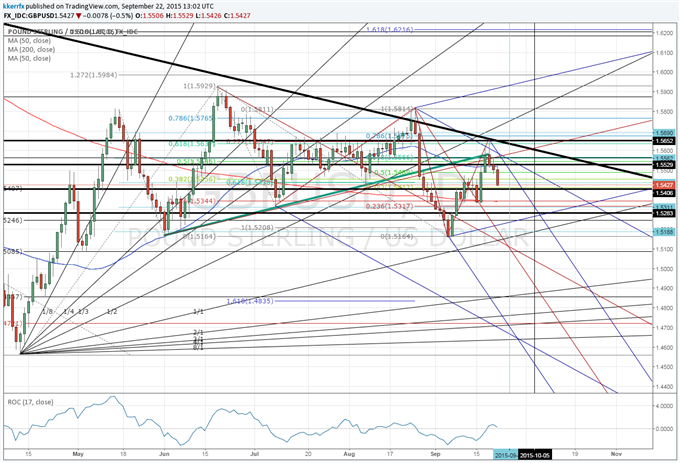 The failure last week in GBP/USD around 1.5660 was pretty much a Gann disciple’s dream as it occurred at a convergence of the 4th square root relationship of the month-to-date low and the 1x1 Gann angle line of the July 2014 high. All in all this price action keeps the pound on the back foot and continues to warn that the broader downtrend in place since the summer of last year is slowly but surely trying to reemerge.

A big part of this broader negative view is centered around the symmetry exhibited at the June and August peaks in Cable as the June highs materialized at the 25% retracement in time (calendar days) of the July 2014 – April 2015 decline while the August one occurred at the 50% retracement in time of this same move. Such clear symmetry in time is usually a hallmark of something more important.

That all said, I see plenty of potential hurdles coming up that could derail an immediate downside resumption. The first is the upcoming autumnal equinox and the seasonal propensity for sterling strength thereafter. When you look at currency seasonal patterns over the last 30 years or so a few key periods stick out and one of them is general dollar weakness starting at the end of the 3rd quarter and continuing on into the end of the year. Of course this is just a seasonal tendency and not too much of a concern unless GBP/USD starts to affirm it by taking out more important levels of resistance.

Much more important to me is how the pound reacts around the 61.8% retracement in time of the July 2014 – April 2015 decline early next week. As noted above, prior relationships from this trend cycle have had an important impact on price and how GBP/USD reacts around this key turn window should prove significant. My preferred scenario is for the pound to bottom out before the end of this week and actually rally into the turn window as another upside failure would help confirm the longer-term negative symmetry. Persistent weakness into early next week would raise concern that a low of some importance is setting up.