Price & Time: Where Does The Correction End In Gold?

Interested in the Gold market? Learn more about it HERE

GOLD: Where & when does the primary downtrend reassert itself? 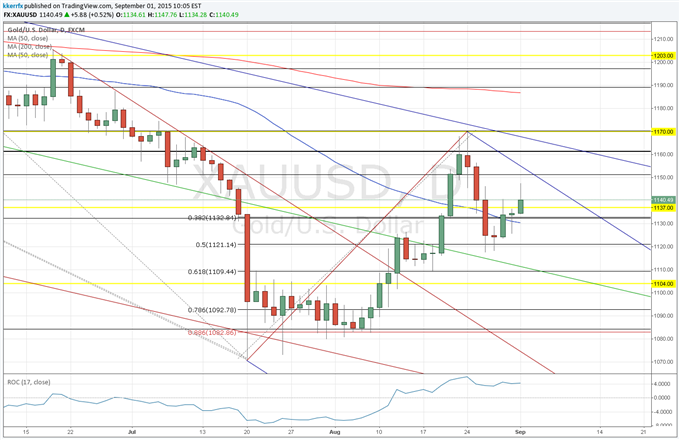 The reversal in gold last week was a nice one if you believe in market symmetry as spot turned right at the 1170 convergence of the 61.8% retracement of the May – July decline and the 3rd square root relationship of the year-to-date low. It is still up in the air whether last week’s turn marks the end of the recovery or if another leg higher is needed before the broader downtrend tries to reassert itself. I tend to favor the latter for a few reasons. The most important of which being the cyclical makeup of things as from a timing standpoint the move off the late July low just doesn’t look quite finished.

If it is indeed just a corrective move then I would like to see it finish closer to 7-weeks so ideally I would like to see things extend (could mean consolidation not necessarily new highs) into the latter part of this week/the start of next week as a few Fibonacci ratio counts converge there as well (including the 2.618 time extension of the April and May highs in spot). The Labor Day holiday in the US next week complicates the matter a bit as it elongates the window by a day, but I have generally found that when a few cycles converge around a holiday it tends to actually confirm the importance of the window.

As far as levels go, the first area of interest where the broader downtrend could try to re-assert itself is a pitchfork line near 1155, then the recent 1170 high (or just below it). In a more extreme correction I could see spot go test the 4th square root relationship of the year’s low around 1200, but not too much beyond that and the intermediate-term technical picture would start to look a lot more positive. Traction under 1109 would warn that the metal has already started down.