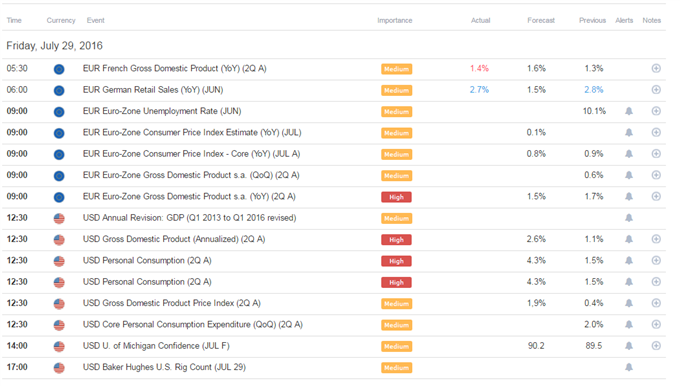 - EUR/USD finding difficulties above the 1.11 handle

- Euro-Zone CPI, GDP and US GDP puts the pair firmly in focus ahead

The EUR/USD is trading sideways between well-defined technical levels following a recent bounce higher after the FOMC rate decision.

Euro-Zone CPI and GDP figures, followed by the US GDP numbers could prove to be influential for the pair and highlight the perceived different paths for the ECB and the Fed.

Advance readings of Euro-Zone July CPI and 2Q GDP are set to hit the wires 09:00 GMT. Headline CPI is expected to remain at current levels printing 0.1% year-on-year, while Core CPI is anticipated to slightly downtick for a 0.8% figure from the prior 0.9% print. The data seems set to indicate once again the huge task in front of the ECB if they are to bring inflation back close to 2% as inflation expectations falter as well.

Euro-Zone 2Q GDP figures are expected to show a slight cooling, with the seasonally adjusted year-on-year number anticipated to show 2Q growth was reduced at 1.5% from the prior 1.7% figure.

Euro-Zone economic data has improved lately versus economist’s expectations, which might imply an upside surprise is possible today. Taken together with recent surveys indicating that Brexit effects on the economy appear contained at the moment, this seems to have allowed the ECB to remain on hold for now. With that said, the market is still pricing a rate cut before the end of the year, a dynamic which could see the Euro being under pressure still.

On the other hand, US 2Q GDP data could be a catalyst for strengthening Fed rate hike speculation. The probability of a rate hike by the end of the year has eased slightly since the FOMC rate decision, but it does appear like the Fed did leave room to move in the next couple of meetings based on incoming data. 2.6% expected 2Q annualized growth compared to last quarter’s 1.1% figure seems like a positive sign for Fed hike speculation. In this context, a beat to expectations today appears likely to see the US Dollar strengthening going forward. 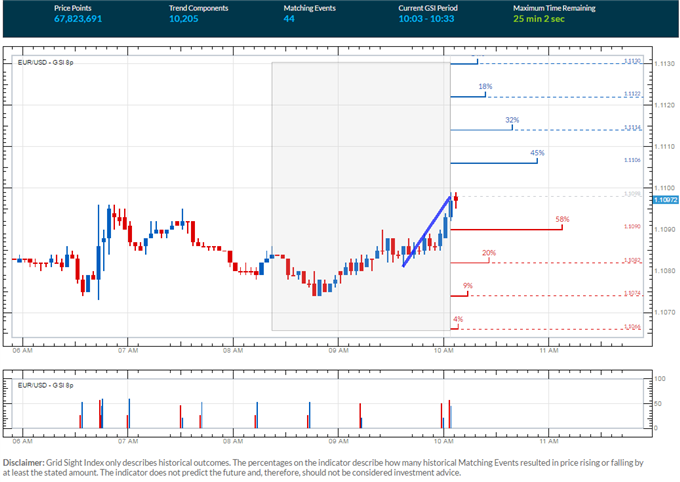 The EUR/USD is approaching possible resistance at 1.11 (see chart below), with GSI calculating higher percentage of past movement to the downside. The GSI indicator above calculates the distribution of past event outcomes given certain momentum patterns, and can give you a look at the market in a way that's never been possible before, analyzing millions of historical prices in real time. By matching events in the past, GSI describes how often the price moved in a certain direction.

We use volatility measures as a way to better fit our strategy to market conditions. The EUR/USD is trading sideways since Brexit, and has seen low levels of volatility. In turn, this could imply that range bound trading plays might be appropriate, but caution is warranted on the aforementioned event risk. 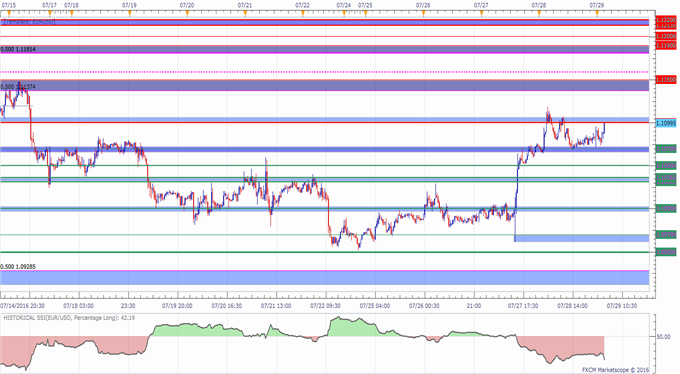 Meanwhile, the DailyFX Speculative Sentiment Index (SSI) is showing that about 42.1% of traders are long the EUR/USD at the time of writing. The SSI is mainly used as a contrarian indicator, but the current range conditions are correlated with retail traders’ more successful periods (see “Traits of Successful Traders” research), implying possible weakness ahead.