AUD/USD Levels to Watch Ahead of China GDP, BoE Influence

The AUD/USD is trading around possible resistance at the 0.7650 level at the time of writing, after moving higher following the Australian employment data that signaled a strong gain in full time jobs.

China GDP figures headline the economic docket as an event risk for the Aussie, but effect on risk trends from the BoE rate decision could see an influence for the pair as well.

China 2Q GDP figures are in high focus looking ahead. The year-on-year 2Q print is expected to show a slight easing to 6.6% from the prior 6.7% figure. The figures are of key importance in the context of slowing global growth as China continues to be a major cause for concern. Some skepticism surrounds the remarkably consistent data, but that doesn’t seem to imply that the figures will be overlooked.

A beat to expectation might be interpreted as supportive for the Australian Dollar due to the close trading relations between the countries, and even more so on possible positive influence on risk trends. Indeed, 10-day correlation between the AUD/USD and the SPX 500 stands at an impressive 93% at the time of writing.

In this context, the BoE rate decision could prove significant for the pair as well. The markets have seen a surge in risk assets, with the S&P 500 hitting all-time highs, perhaps on the prospects of a search for yield as bonds yields hit record lows across the board on the backdrop of the Brexit decision and possibility for further stimulus by central banks. A hit to risk assets seems likely to send the pair lower, while a “risk on” environment could see a continuation higher. 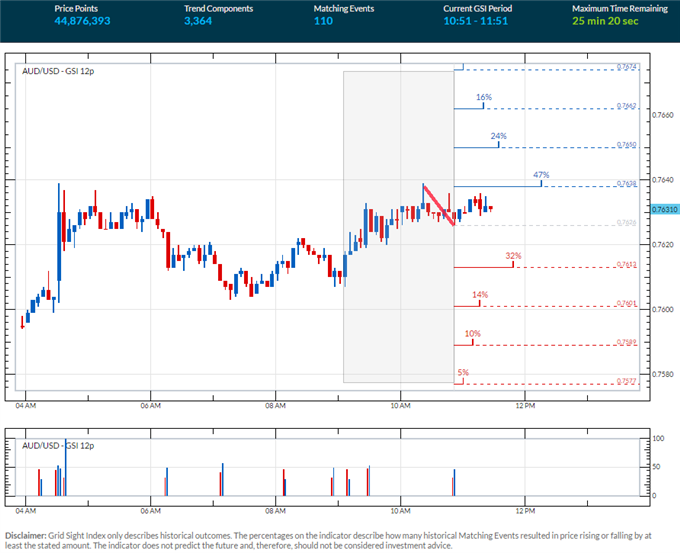 The AUD/USD is trading between the 0.7650 resistance and 0.7600 support at the time of writing (see chart below). The GSI indicator above might be used when price reaches levels of interest. The indicator calculates the distribution of past event outcomes given certain momentum patterns, and can give you a look at the market in a way that's never been possible before, analyzing millions of historical prices in real time. By matching events in the past, GSI describes how often the price moved in a certain direction.

We use volatility measures as a way to better fit our strategy to market conditions. The market seems likely to see heightened volatility with the even risk ahead, which could imply that breakout trades are preferable in the short term. Meanwhile, the DailyFX Speculative Sentiment Index (SSI) is showing that about 44.3% of traders are long the AUD/USD at the time of writing, apparently trying to pick a top, implying possible further strength ahead on a contrarian basis.