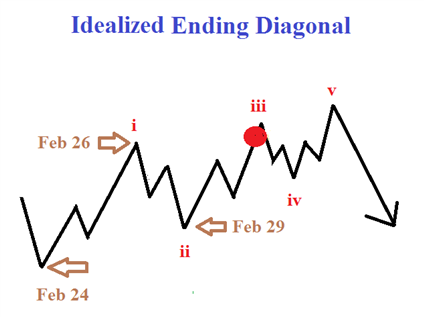 -Dow Jones has short term resistance suggesting a sell off to 16,780 prior to another push higher

-Below 16,450 invalidates the analysis

Dow Jones Industrial Average (DJIA) finished strong yesterday and adds weight to the analysis provided earlier in the morning. Bigger picture, we are waiting for prices to finish carving a 5 wave move higher that displays similar size relative to the February 11 to February 18 up trend. We believe this bounce began on February 24 and we are about half way through in the wave structure, though most of the damage has been done already via price. We have a bigger picture target zone in the 17,000-17,300 range.

Though price is getting closer to the target, there are still some shorter term intraday opportunities for the nimble traders. The rest of this piece will cover patterns in the US30, a CFD which tracks the Dow Jones Industrial Average. Residents outside of the United States can trade this CFD through FXCM.

It appears yesterday’s move higher was a wave iii of the 5 wave move. Therefore, we can anticipate another move lower followed by another move higher to possibly finalize the bullish pattern. We are approaching the point in the wave structure where the bulls need to be careful and the bears can begin sharpening their claws while looking for those hot spots to initiate short positions.

Dow Jones (ticker: US30) Elevated Probability of Softening Towards 16,780 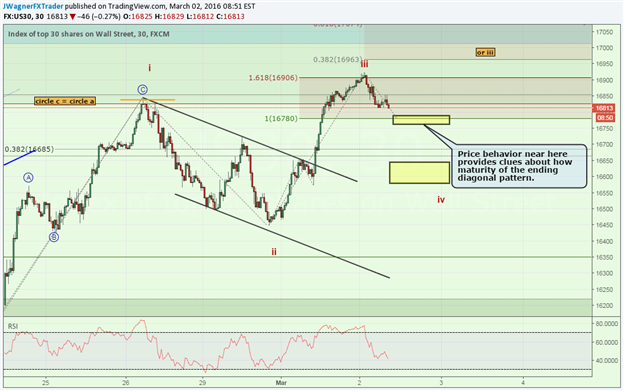 Digging into the Elliott Wave technical picture, the break above 16,845 means we can move the invalidation point of this analysis to 16,450. That is to say if prices fall apart and blow through 16,450, we’ll need to go back to the drawing board on the analysis and consider other options.

The strong day yesterday does build the case we are in a wave iii of an ending diagonal pattern. There is a wave relationship near 16,906 so the overnight reversal of 16,923 is in harmony thus far. This wave relationship suggests a sell off towards 16,780. Be mindful there is a false breakout zone of 16,923-16,963. If prices follow up yesterday with a pop on the open, intraday traders may consider it to be a rally to sell back towards 16,780.

If we get to 16,780, the behavior of prices will provide more clarity on our location in the idealized ending diagonal structure.

For example, it is possible to count yesterday’s high as all of wave iii OR just the first leg of iii. Either way, we there is an elevated probability of a sell off to 16,780.

If yesterday was all of wave iii, then we’ll likely see a deeper sell off in wave iv that holds above 16,450.

Each year, the DailyFX team publishes their top trading opportunities guide and this year included some commentary regarding trading the stock market. Grab the 2016 Top Trading Opportunities Guide and receive the Q1 Equities forecast as well.