US Oil Technical Analysis: Waiting For Break Above $46

The technical outlook for crude oil comes into specific focus this week due to the turn higher in oscillators followed by a sideways congestion pattern. A break above $46 a barrel would allow a likely run into prior resistance of $49.49 per barrel before looking to the 100% Fib extension of the move up from the $37 low toward $55 a barrel followed by the 1.618% extension near the May high of $62 a barrel.

Given the strength of the trends in summer of 2014, focus will be on prior structural support around $41.75 per barrel. A break below there would favor move back near annual lows and a continuation of the overall trend. The technical picture for the US dollar index, which shows an inverse correlation to crude oil, lacks clarity though the market has moved away from the 12,100 zone multiple-times since March. Another breakdown from 12,100 would favor a potential break higher in Oil.

Currently, the sideways price action to open the month of September turns focus to the swift move higher move from $37 a barrel on August 24 to $49 a barrel on August 31before the consolidation. A correction implies the prior move will resume which was a 30% move higher over seven days. A break above near-term structure resistance at $46 a barrel could open up another multi-percentage move as those who have stayed with the downtrend may further unload their short positions after 21+ days could see another unwindhigher similar to the April move.

Correlated Markets: should a significant break out or breakdown happen in oil, it would be worth it to look tothe highly positive correlationof equity markets and emergence market currencies to confirm. You could look to a move higher in the S&P 500 to likely align with the move higher in oil. Additionally, a potential move higher in oil should also align with a move lower in USDEMFX like USDZAR, which is moved higher as oil traded lower. 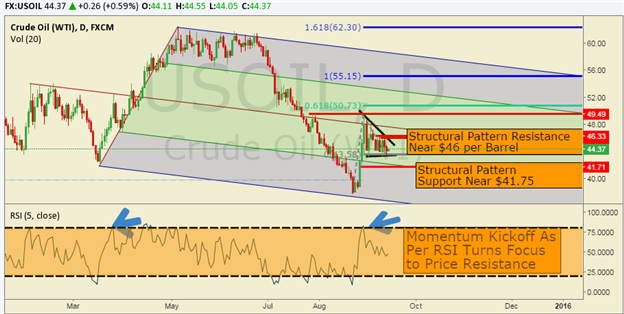