Gold prices remain under some pressure on Thursday, briefly hitting 29-month lows of $1,654/ounce as the US Dollar continues to benefit from significant haven demand.

Ukraine remains front and centre for fundamental trading with Vladimir Putin’s historic military mobilization earning predictable opprobrium and defiance from the West and beyond. The US Federal Reserve’s three-quarter point interest rate rise Wednesday had been widely anticipated, but the central bank’s concurrent outlook was perhaps even more hawkish than had been expected. This has had the knock-on effect of raising US Treasury yields back toward 11-year peaks, which is further bad news for non-yielding assets such as precious metals.

In a sober assessment, the Fed seemed to acknowledge that below trend growth would be a price worth paying to crush inflation, with markets now weighing the chance that even a recession might be something the central bank would consider the lesser evil if it brings prices to heel.

With most developed-market central banks also hawkish and in the mood to raise rates further, the general fundamental backdrop looks poor for gold, given that it has to a large extent been trading much more like a risk asset than any sort of haven in recent months. Increasing yields in government debt markets have clearly taken much gloss of the market, and are likely to continue to do so.

Recommended by David Cottle
How to Trade Gold
Get My Guide

The well-attested downtrend channel from March 8 retains very much in place on the daily gold price chart. 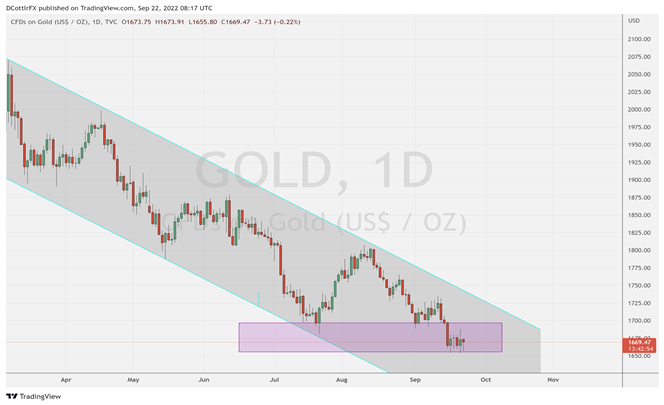 Prices have formed a broad range in the centre of that channel in the past week or so. This is bounded to the upside by $1697.45, the top of September 15’s precipitous daily fall, The range base is in the $1.655 area where the bears have been held on a daily-close basis ever since. Bulls will need to convincingly regain the range top and, ideally, hold the market above that level if they are to mount a successful attempt at the admittedly resilient channel top. No such attempt looks immanent, however. Indeed, another trial of the range base looks more likely in the near-term. But IG’s own client sentiment data suggest that the outlook is more mixed at current levels, with more than 80% of respondents bullish on the metal’s prospects from here.

There would seem to be a lack of appetite to push the market decisively lower from current levels. However, given the clearly threatening fundamental backdrop, it may be better to see how current range trade plays out before committing to this market.