The South African rand has been gradually strengthening against the greenback after reaching swing highs in mid-July this year but recent concerns around a global economic slowdown prompted risk aversion leaving Emerging Market (EM) currencies vulnerable. The rand’s resilience (see graphic below) during these tough currency conditions, stems from an increase in mining production and exports as a result of Europe’s sanction on several Russian commodities including coal. This could not have come at a better time as the Chinese economy (South Africa’s largest importer of commodities) looks to be anguishing under the strain of a property crisis as well as a ‘zero tolerance’ COVID-19 approach. 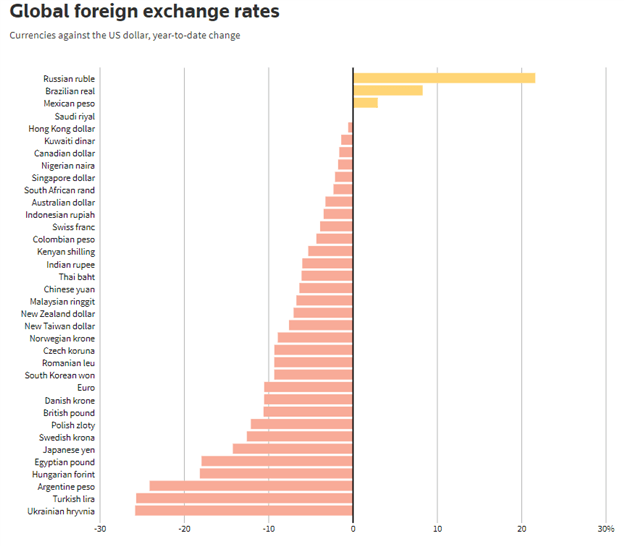 Earlier this afternoon, South African retail sales figures were released showing a marked improvement MoM for June however, the extreme lag on this data was not reflected in rand price action. More pertinent was the U.S. issue (0%) which marginally missed estimates at 0.1% showing no change in sales from the prior month while core exceeded expectations which may support further dollar strength.

Later this evening the U.S. FOMC Minutes will be in focus with markets in anticipation of a push back to the current 2023 monetary easing narrative or not. This should give some indication as to short/medium-term forward guidance on the U.S. dollar.

ZAR being a high beta (high risk) currency coupled with global recessionary fears, we may see the rand come under pressure later in the year. The safe-haven dollar may gain more traction particularly when the local South African political and economic landscape remains susceptible. Looking ahead, I favor a weaker rand against the dollar with the R17.00/$ handle coming into consideration in due course. 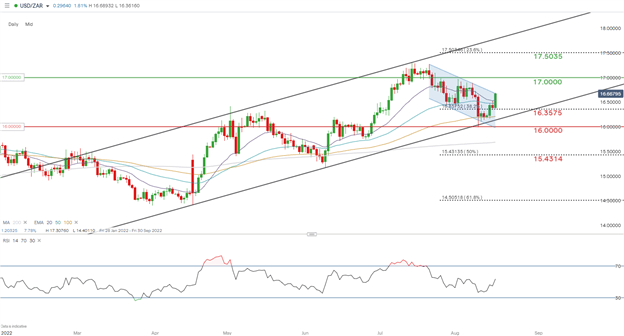 Price action on the USD/ZAR daily chart above has bulls pushing on channel resistance (blue) representing a bull flag type chart pattern. This comes within the larger upward trending channel (black) and may well re-test the 17.0000 psychological area of confluence should we get a confirmation close above channel resistance. Short-term, there may be a slight pullback before a revival of the broader uptrend leaving the rand relatively weak – dependent on the FOMC outcome.