Yesterday we had a number of prominent members of the Federal Reserve provide their thoughts on the state of the economy, inflation and the future path of interest rates which was perceived by the market as a green light for a resumption of the longer-term trend (dollar strength).

Since last Thursday’s negative Q2 GDP print, markets appeared to price in a little more caution regarding the technical recession and the possibility of a slower rate of price hikes which saw the dollar trade lower. Therefore, currencies that had previously lost ground to the dollar, like the Japanese Yen, used the opportunity to recover some losses.

The period of reprieve appears under threat as the Fed’s Daly stated, “work on inflation is nowhere near almost done” – implying a continuation of rate hikes. Chicago Fed President Charles Evans backed 50 or 75 basis points in September and foresees interest rates between 3.75% and 4% by the end of 2023. Cleveland Fed President Loretta Mester fueled further bullish sentiment saying, “we need really compelling evidence that inflation is moving down, not seeing that yet”.

The technical outlook is much changed from yesterday. The Fed-inspired turnaround saw USD/JPY initially attempt to test 130 but ultimately fell short and reversed course. Current price action hovers around 133.20 with what appears to be a doji candle – often resembles indecision.

Support appears via the 131.35 level (prior support), followed by the 130.00 psychological level. Resistance appears at 134 and 135 if the retracement of the short-term downside move is likely to continue. Given the recent uncertainty, USD/JPY may consolidate before picking the next directional move. 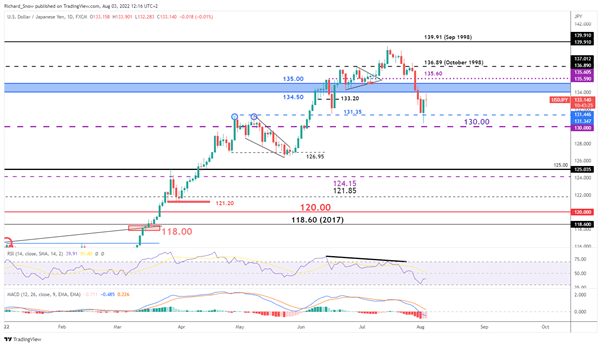 Major Risk Events on the Horizon

Scheduled risk events for the day are fairly light apart from US ISM services data which is anticipated to remain above the 50 mark. Later today we have the Fed’s Patrick Harker speaking and he is likely to echo a similar sentiment to that of his colleagues yesterday. On a geopolitical note, Nancy Pelosi’s visit to Taiwan and China’s immense disapproval is likely to keep markets on edge this week. The rest of the week sees more Fed speakers in the lead up to non-farm payroll (NFP) data on Friday.

Yesterday’s Job Openings and Labor Turnover Survey (JOLTS) data revealed the largest slowdown in job openings in over 2 years. Job openings dropped 605,000 to 10.7 million in June. Job openings are expected to ease as the Fed continues to tighten financial conditions, having made peace with the fact that aggressive hikes, with the aim of lowering inflation, will lead to pains in the labor market. 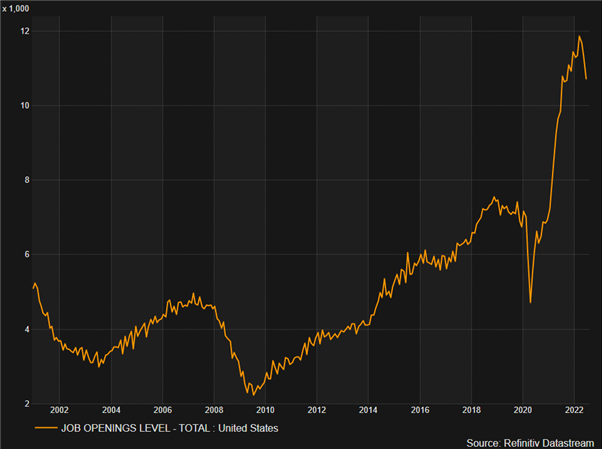